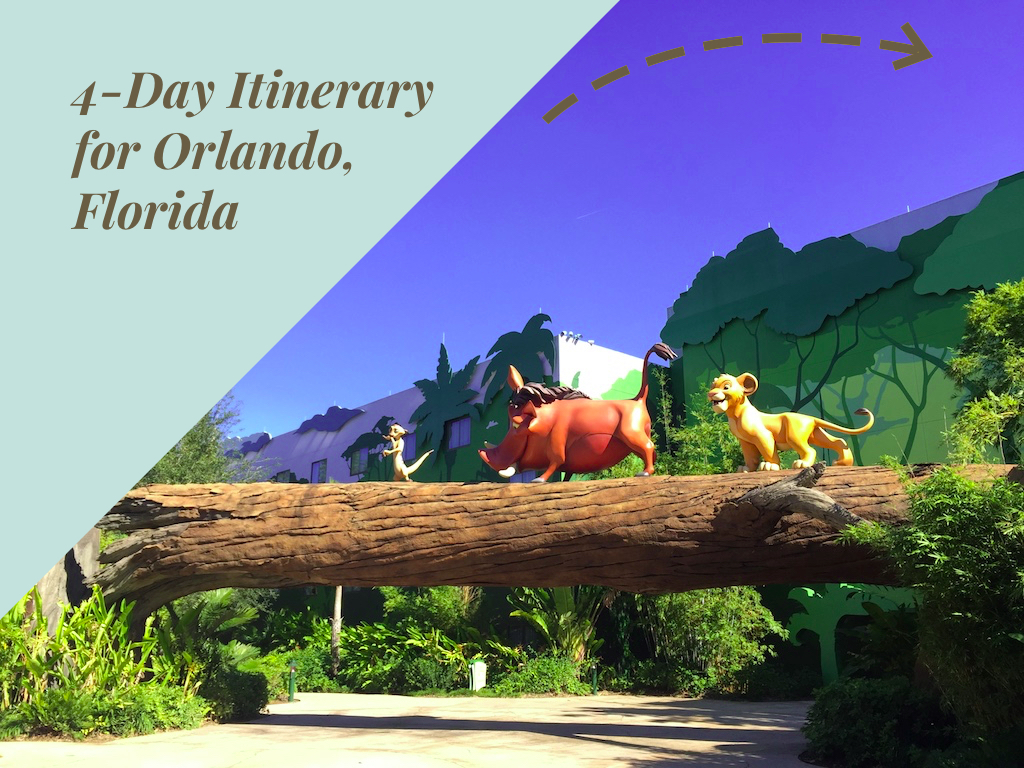 CLICK THE PICTURE ABOVE OR HERE TO START PLANNING YOUR ORLANDO ADVENTURE TODAY WITH A TEMPLATE!

My one single piece of advice for tackling Disney World is this: GO EARLY. Yes, be that person that is there before the rope drops. Be that person who leaves at 1pm to go take a nap. It is so worth it, trust me. EPCOT is pretty easy to handle because you divide your time between the two parts of the park: Future World and World Showcase. As Future World opens first, take advantage of your early arrival by rushing over to Soarin’. Your first Fastpass should be sometime mid-morning or right around noon. Some great rides to get Fastpasses for are Test Track and Mission: SPACE. After Soarin’, head over to Test Track and also be sure to check out the fun shops around this area.

Once you’ve hit all the Future World attractions, it’s time to head on over to World Showcase. I always start off with Mexico because that way I can have lunch at La Cantina de San Angel. After lunch, continue clockwise around the lake by hitting Norway, China, Germany, Italy, Japan, and France. It’s always really difficult to pick where to go for dinner in World Showcase, so just choose the cuisine you like the most. Or, perhaps try something new! After dinner, hit up the rest of the countries you missed like the United Kingdom and Canada.

On your way out of the park, you can quickly go on The Seas With Nemo and Spaceship Earth. 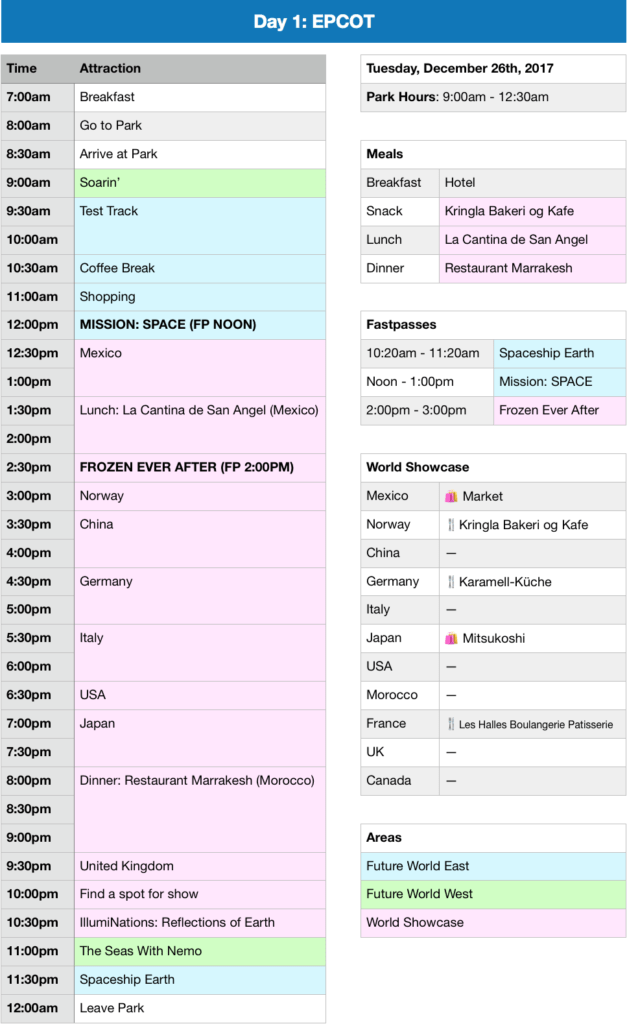 With extra magic hours, Animal Kingdom typically opens the earliest out of all the parks. But, like I said, really try and get there right before opening. Animal Kingdom used to be really easy to do in half a day, but with the addition of the land of Pandora, this is no longer the case. As you’ll be starting out really early, I would do a half day at Animal Kingdom from 7am until 1pm. If you want any chance of riding the new attraction, Avatar Flight of Passage, go first thing or try and grab a Fastpass. Otherwise, count on really long lines (the longest in all of Disney World). If you’re not heading to Pandora first, take advantage of an empty park by exploring DinoLand U.S.A. Go on DINOSAUR, Primeval Whirl, and even TriceraTop Spin. Make your way to Asia and hop on Expedition Everest, one of the best roller coasters of all time! At this point it’ll still be quite early in the morning, so take a break by checking out Discovery Island and watching It’s Tough to Be A Bug! inside the big tree. Head over to Africa and don’t miss Kilimanjaro Safaris. Some of my favourite snacks are in Africa. Check out Harambe Fruit Market or Zuri’s Sweet Shop. Finally, it’s time to walk over to Pandora and see what all the hubbub is about. Take your time exploring this incredibly impressive land! Then, end your time at Animal Kingdom with lunch at the Satu’il Canteen.

As you probably had an early start, take advantage of the extra time and relax at the hotel! Or, take a dip in the pool. Once you’re rested, spend the rest of the day at Disney Springs. 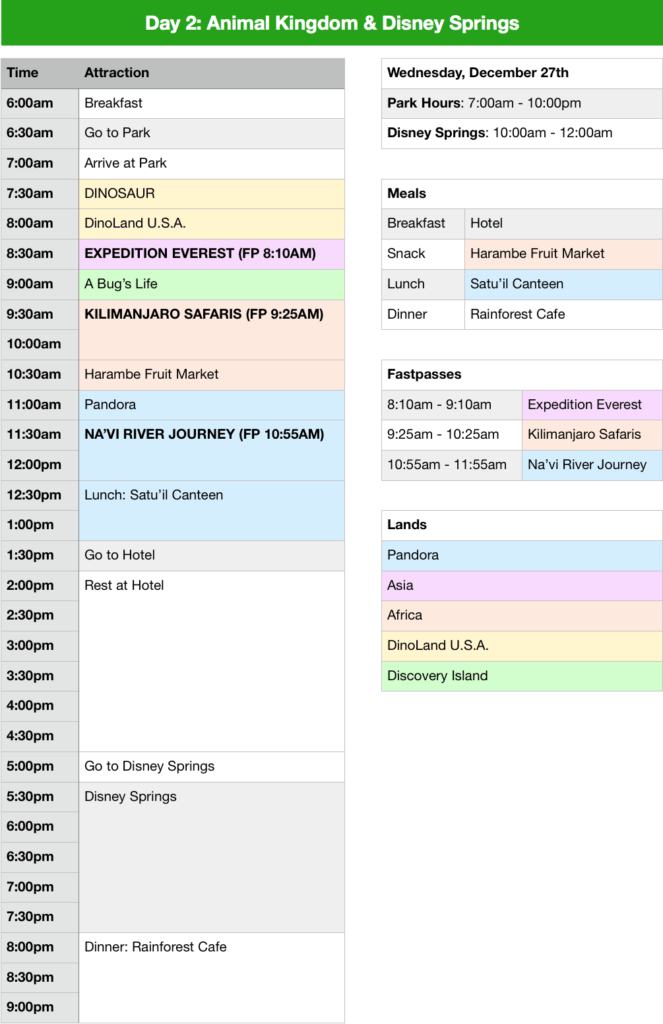 I think Day 3 is a good time to take a Disney break and head over to another great set of parks: Universal! They have two amazing parks, Islands of Adventure and Universal Studios. The latter was kind of a dud for a long time but it has recently had a lot of improvements so it’s definitely worth a visit.

Start off at Islands of Adventure. First thing in the morning everyone will run to Harry Potter to the right, so you should swing left. Enjoy the Amazing Adventures of Spider-Man and well as the new ride, Skull Island: Reign of Kong. After the morning rush, then you can head to the Wizarding World of Harry Potter. Your longest line of the day will most likely be here, so it’s time to get that out of the way. After you’ve gotten your fill, make your way back counterclockwise hitting up Jurassic Park River Adventure, Dudley Do-Right’s Ripsaw Falls, and Popeye’s. For lunch, I recommend something quick and easy like Doc Sugrue’s Desert Kebab House. If you’re in the area then might as well as digest your lunch by going on Poseidon’s Fury. Before heading back to Harry Potter, check out Seuss Landing and perhaps even go on the ride The Cat in the Hat.

It’ll be mid-afternoon when it’s time to take the Hogwarts Express over to Diagon Alley in Universal Studios. After you’re done with Harry Potter World, just have fun exploring the rest of the park. For dinner, head to Antojitos for some delicious Mexican fare. 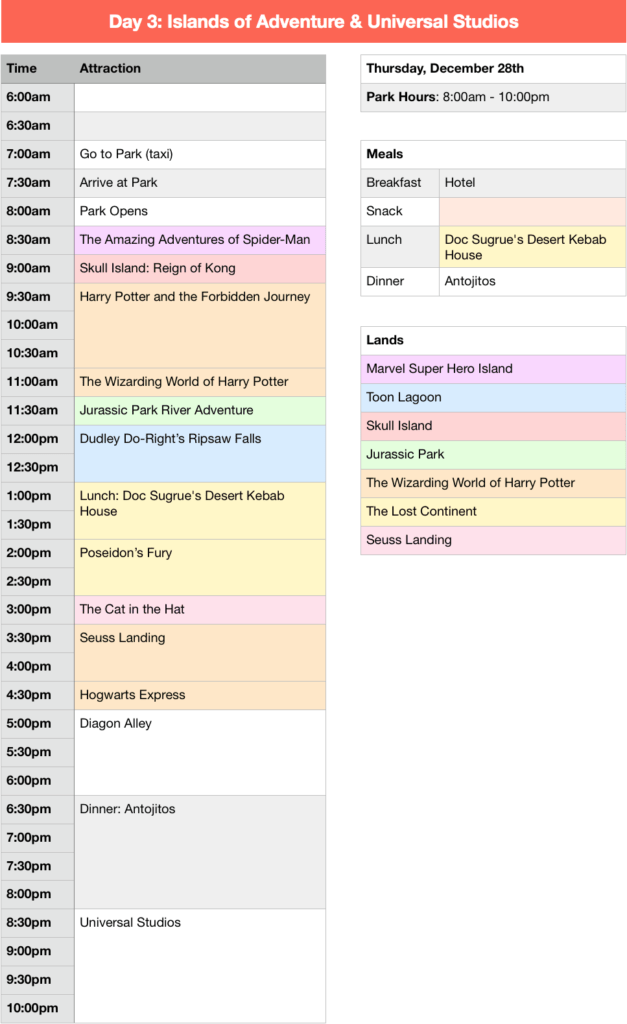 If there’s one park that you must arrive early for, it’s the Magic Kingdom. Run over to Big Thunder Mountain Railroad and Splash Mountain. I’d advise your first FastPass to be around mid-morning, perhaps for Space Mountain! While you’re in Tomorrowland, make time for Buzz Lightyear.

Most of your time will probably be spent in Fantasyland because there are just so many cute rides to check out. Hit up Journey of the Little Mermaid, Dumbo, Seven Dwarfs, It’s a Small World, and Enchanted Tales. There’s just so much to see!

Lunch is pretty tricky in the Magic Kingdom and the lines are bound to be long, so I’d go for a quick service kind of place so as to not waste too much time. After lunch, it’s time to hit up the rest of rides. The Haunted Mansion is a great, immersive experience as is Pirates of the Caribbean. Once you’ve hit this list of attractions, the rest of the day is really up to you! You can schedule in some rest and relaxation, or check out some of the smaller, less popular rides. For dinner, try and reserve somewhere special. We opted for the Crystal Palace which has the additional benefit of being a character dining experience! Winnie and the Pooh and all his friends will make a special visit. 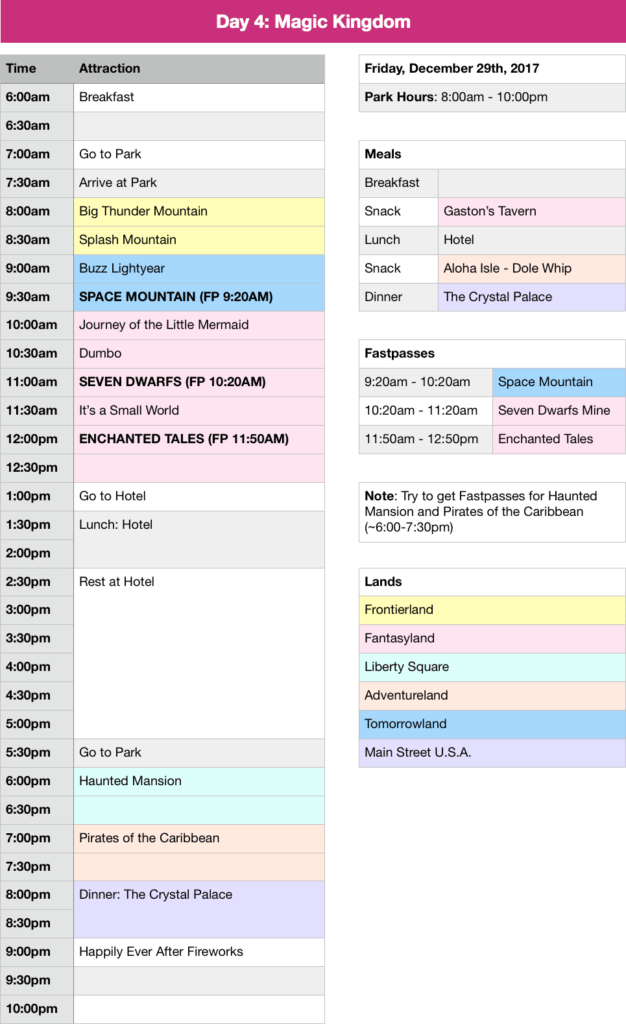 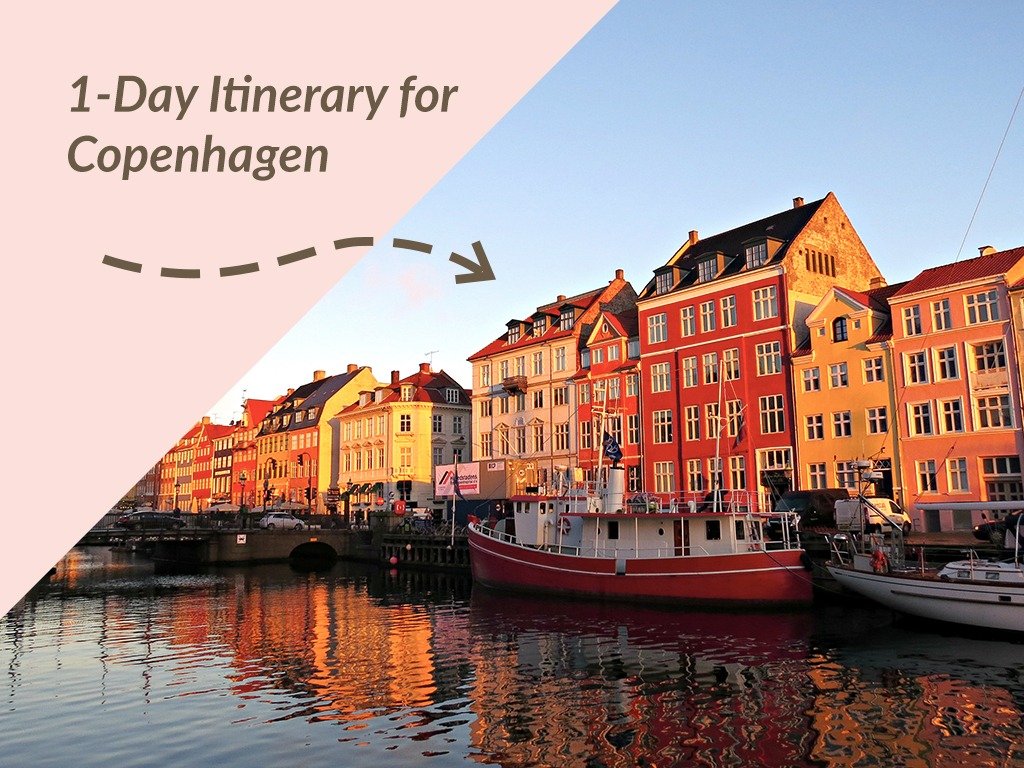 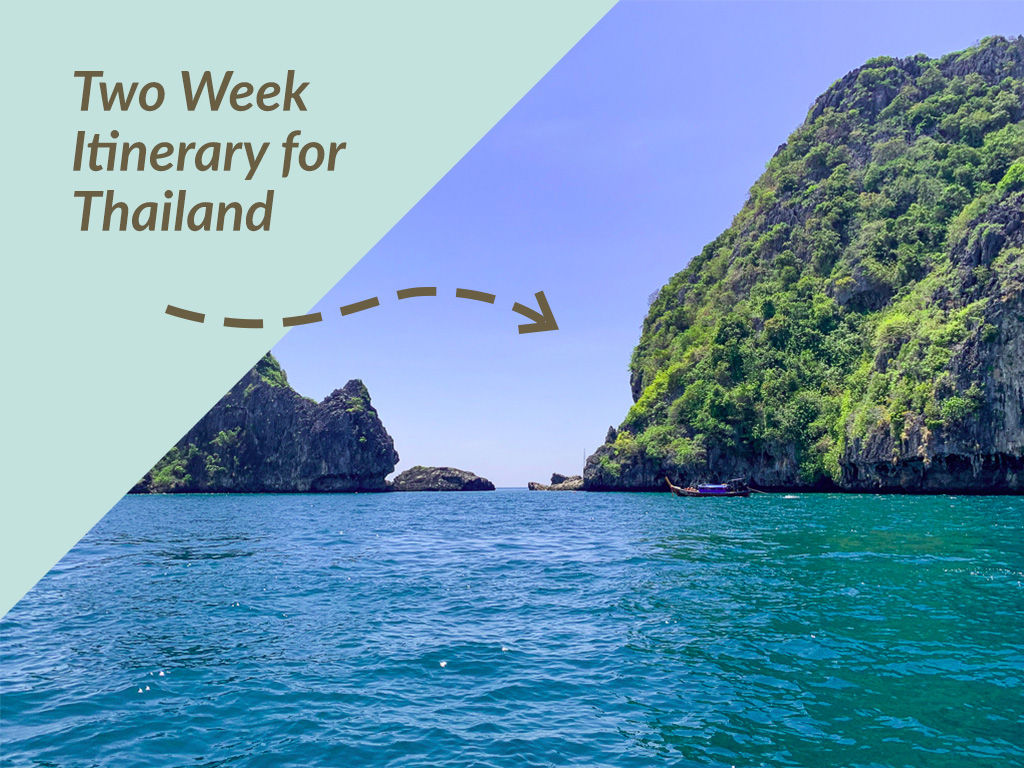 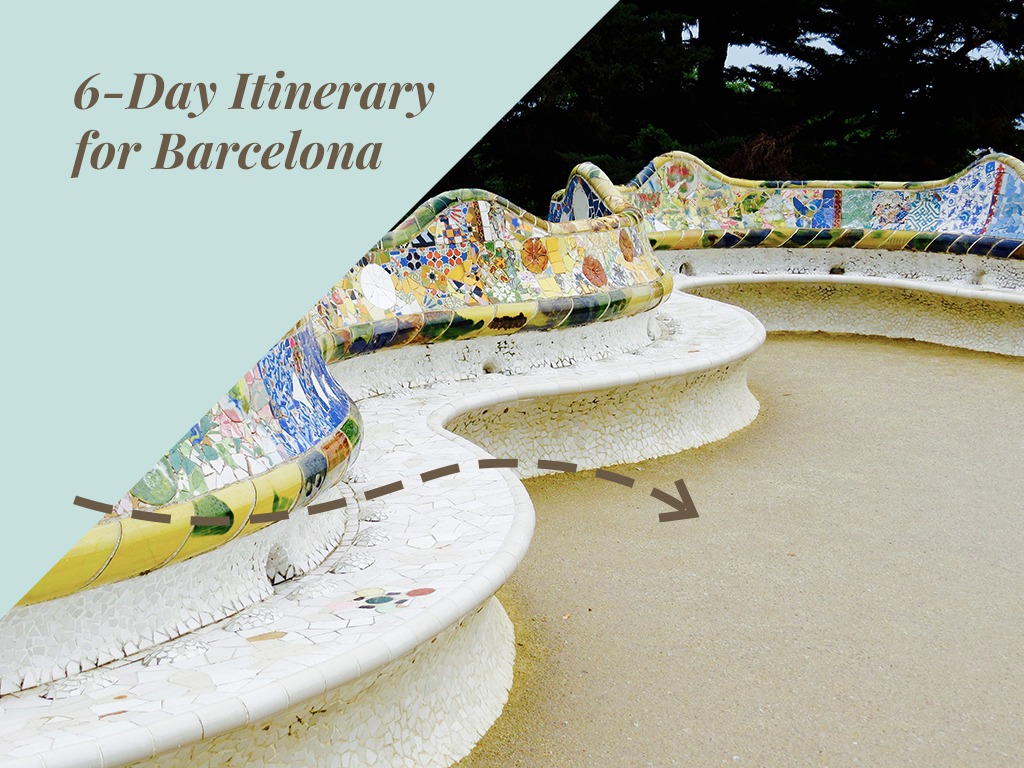