The first thing I do when planning a trip is ask myself this question: what am I going to eat?! The restaurants and dishes I try tend to be at the very heart of my travel itineraries. This still rung true on my trip to Liverpool in the summer of 2019. Even a seemingly dull place in terms of cuisine must have some gems!

Turning to our faithful internet, I was amazed at how many blogs and travellers recommended Mowgli, an Indian restaurant. I simply could not ignore all the rave reviews. Living in London, it’s difficult to be convinced that somewhere else would have better Indian food outside India. In fact, perhaps better than the majority of restaurants in Indian cities! My absolute favourite Indian restaurant in London is Roti Chai, so I was curious as to how Mowgli would compare especially since both Roti Chai and Mowgli offer Indian street food. I was certainly not disappointed. 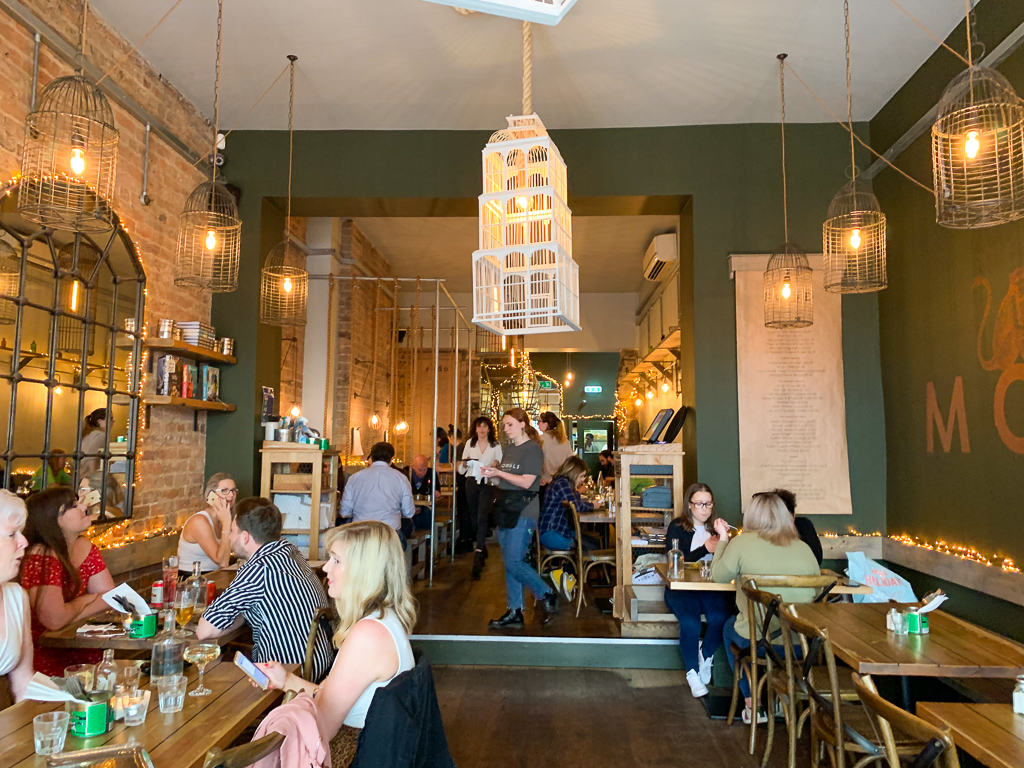 Mowgli was founded by Nisha Katona, a barrister-turned chef from Ormskirk, a small, market town in West Lancashire (only about a 30 minute drive north of Liverpool). Yes, she worked as a full time child protection barrister for 20 years and then had a change of heart, turning to the restaurant business. As a lawyer in training myself, I wonder if this will be my fate!

The first thing you notice about Mowgli is that it is chic and modern, but still has its own Indian-esque style. By that I mean there’s lots of dark greens, wood, reminiscent of the Indian jungle. I even sat on a wooden swing, which was quite fun. Now, onto the food! 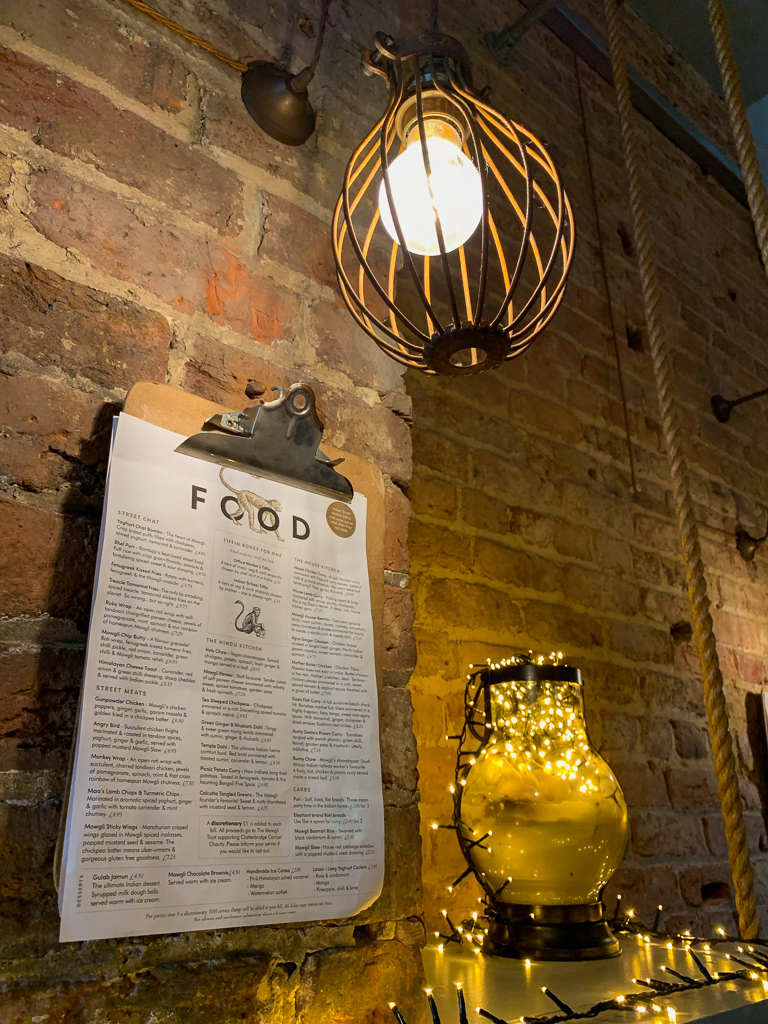 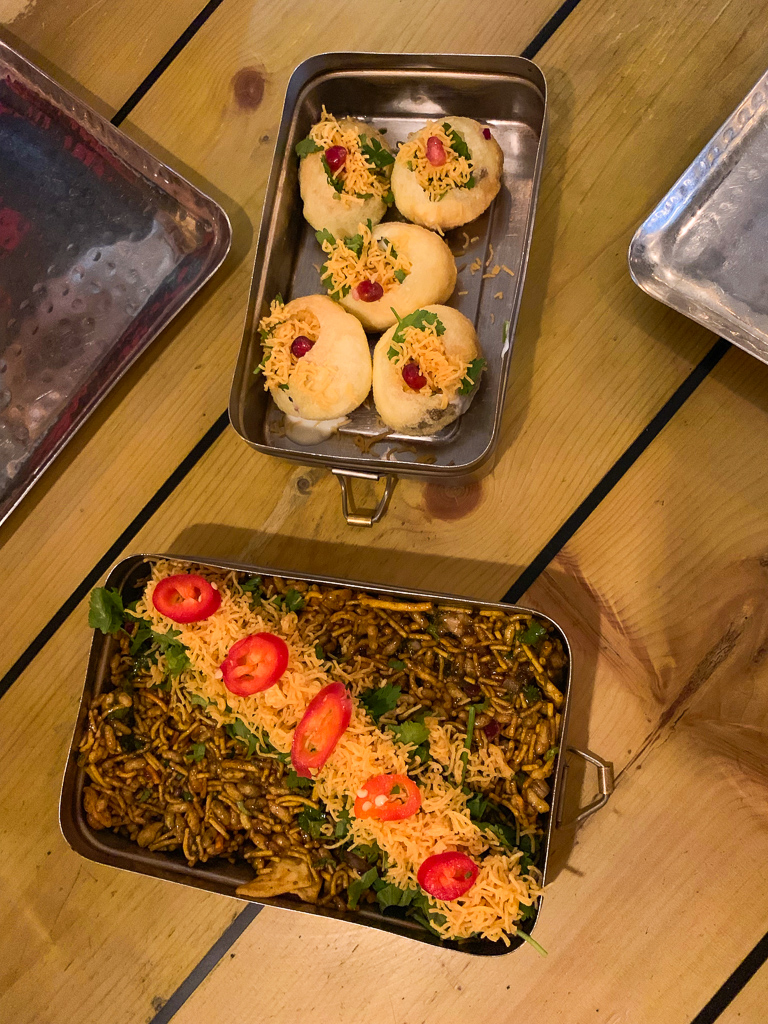 We started off with some Street Chat, chat meaning savoury snacks originating from India that are typically served along roadside tracks in stalls or food cards. We tried the Yoghurt Chat Bombs, crisp bread puffs filled with chickpeas, spiced yoghurt with tamarind and coriander. These truly were the bomb. The sweetness of the yoghurt blending with the salty crispy bread was just absolute heaven. We also tried the Bhel Puri, a famous street food dish from Mumbai. It’s puffed rice with peanuts, served with a spiced sweet and sour dressing. I could eat this portion a million times over. It’s the perfect snack food! We had tried both these dishes at Roti Chai as well, and dare I say perhaps these are major contenders?!

I’m pescatarian, do we didn’t go for the Street Meats, however we did pick one dish from the other two menus. From the Hindu Kitchen we had the Mowgli Paneer, one of the most popular dishes. It was delicious, full of flavour and the paneer floating from the curry was a special treat to find. From the House Kitchen we had the Goan fish curry. This was my favourite — I never knew a fish curry could taste so good! You can’t go to Mowgli without trying it out. 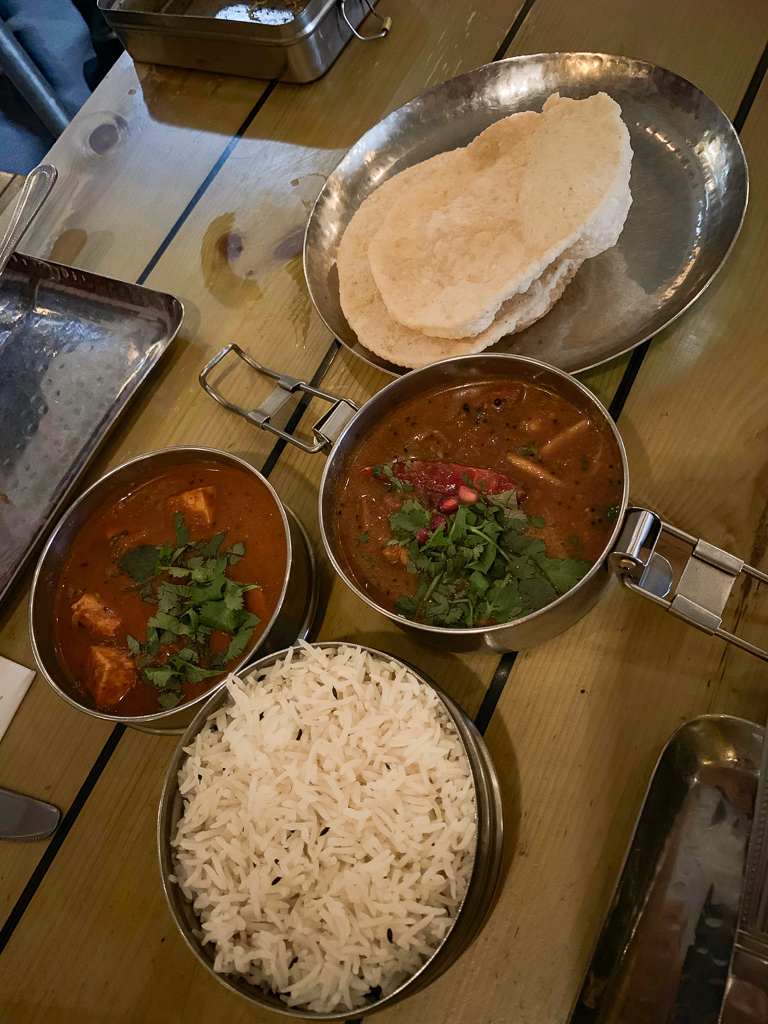 I didn’t think any Indian place in England could stand up to Roti Chai, but honestly Mowgli is a great alternative. The dishes are rich with flavour, but equally refreshing. I think there’s a tendency for some Indian dishes to be quite heavy, in terms of contents and also sauce. However, Mowgli represents Indian food that focuses on the balancing of flavours on your tongue. My favourite dishes, and therefore my recommendations, are the Bhel Puri and the Goan fish curry… though the Yoghurt Chat Bombs are great too. Heck, have as many dishes as you can! 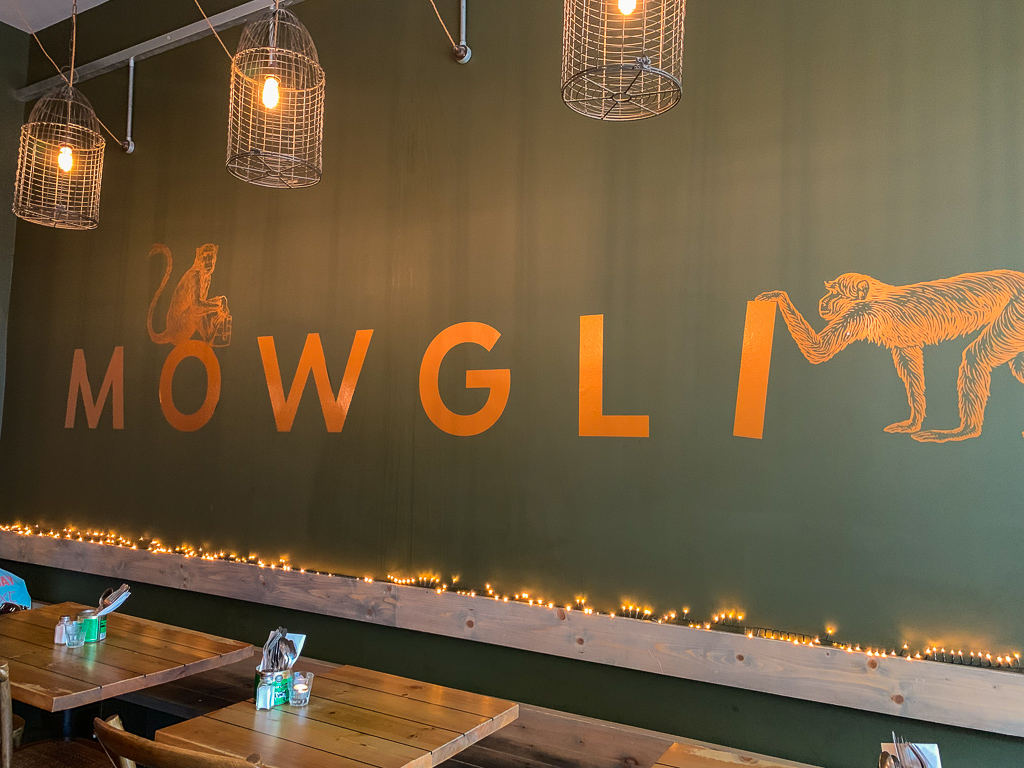 You can find Mowgli across England. We ate at the Bold Street location in Liverpool (Mowgli’s first location). Elsewhere, perhaps try Mowgli if you’re in Manchester, Birmingham, Oxford, Nottingham, Sheffield, Cardiff or Leicester! They’ve expanded quite a bit, and are planning to expand even more. And while their expansion may put restaurant connoisseurs off, I swear that their food is so so so good.

Have you tried Indian street food? What do you think of the flavours? 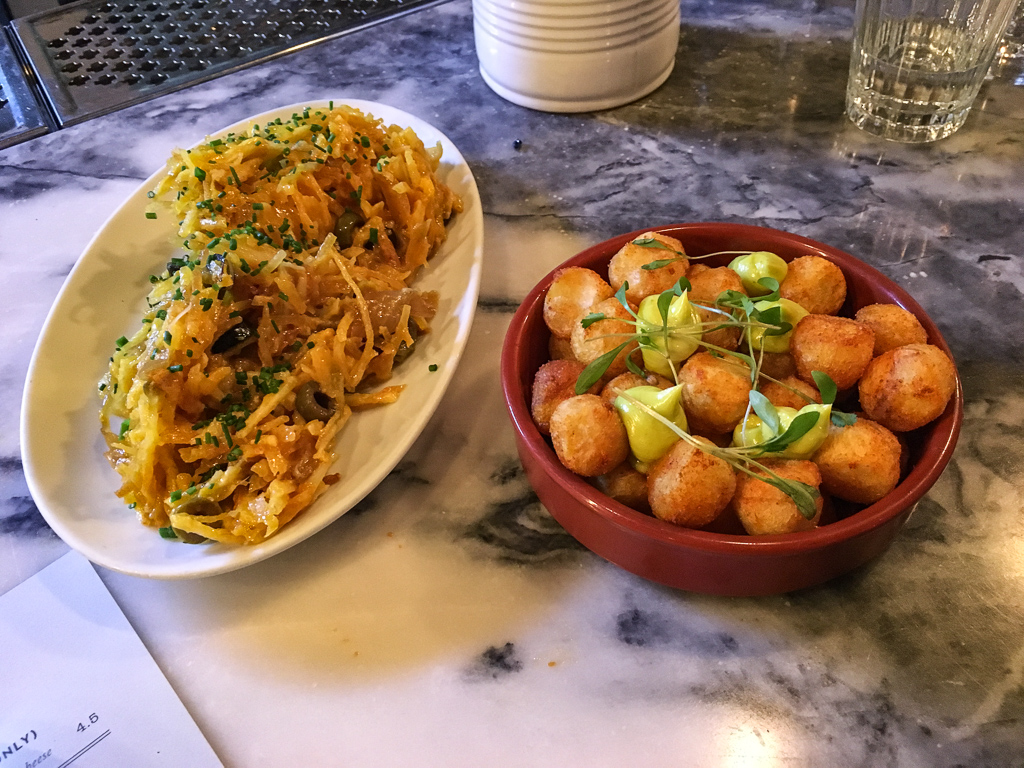 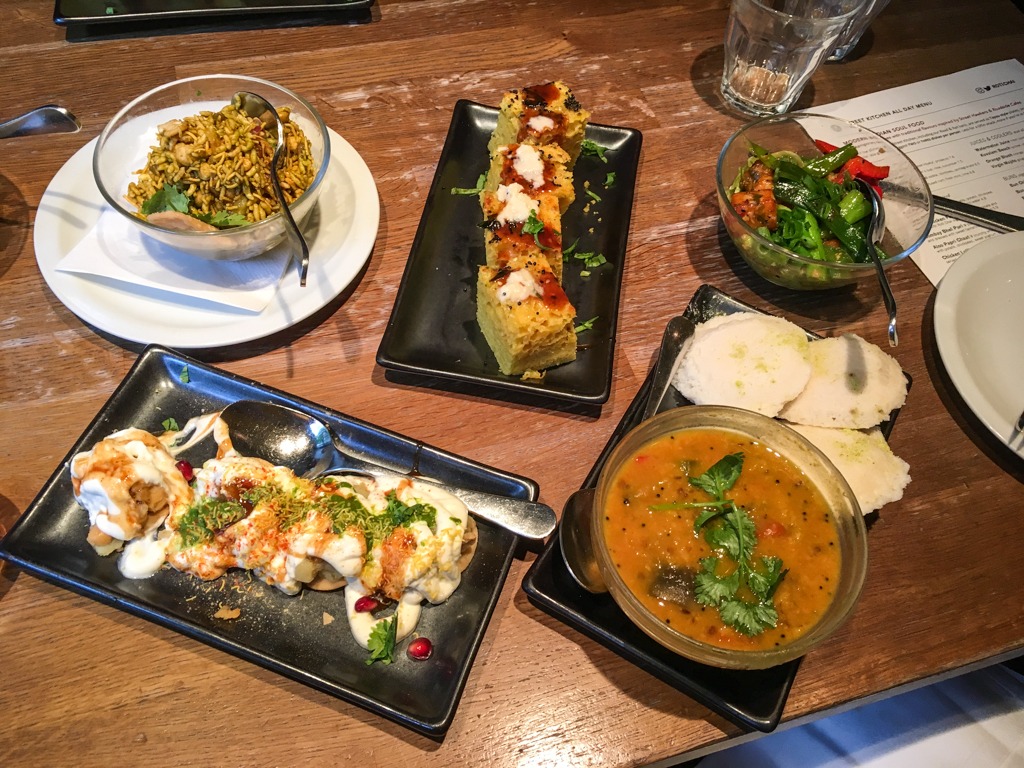 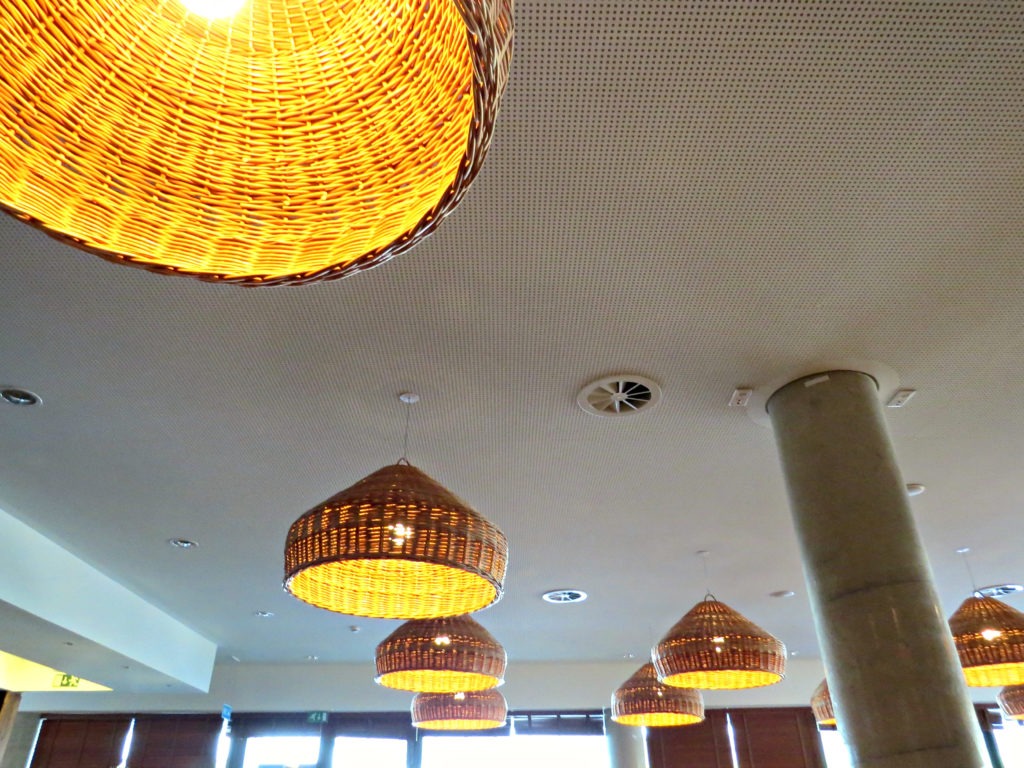