This post is Part IV of my short blog series on my trip to the Rías Baixas (“Lower Estuaries”), a coastal region in Galicia, Spain, in September 2019. Make sure to read Part I, Part II, and Part III as well. The Rías Baixas are made up of four rías: Ría de Muros e Noia, Ría de Arousa, Ría de Pontevedra, and Ría de Vigo. Each blog post will cover each ría in detail so that you can plan your own road trip around this beautiful, unique area of the world!

We have now reached the southernmost estuary of the Rías Baixas, Ría de Vigo. The name comes from the fact that the large city of Vigo is located along this ria. We had actually been to Vigo before as this is where we took the ferry to the Cies Islands. These islands are considered the jewels of this ria, but there is plenty more to discover here too. 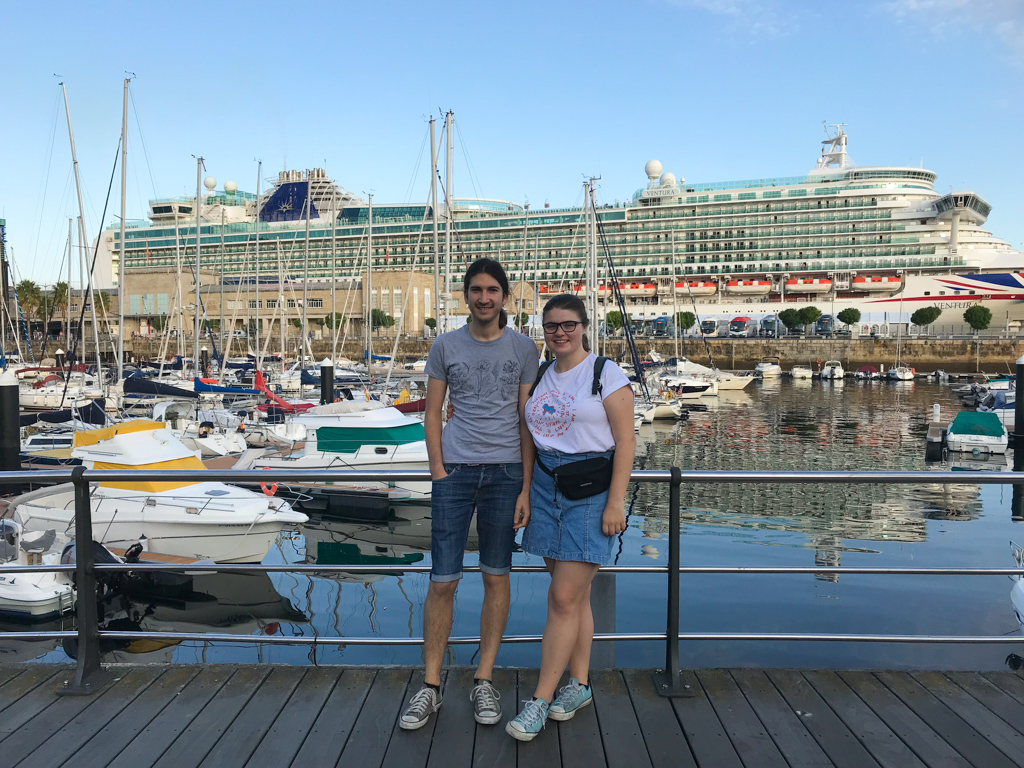 This ría is the most important one in the Rías Baixas from an economic perspective. It’s also one of Europe’s main ports and is a major fishing capital. Throughout the ría, you can see hundreds of mussel beds out on the water, so it’s no wonder that Vigo supplies tons of seafood to the rest of the region, country, and continent. We did visit the city of Vigo, but more on that later. For now, I’ll introduce you to the ría via some charming, small-town spots.

On the northern shore of the ria is the town of Cangas. We wandered around this seaside resort town, exploring its traditional fisherman houses and lively market and square. 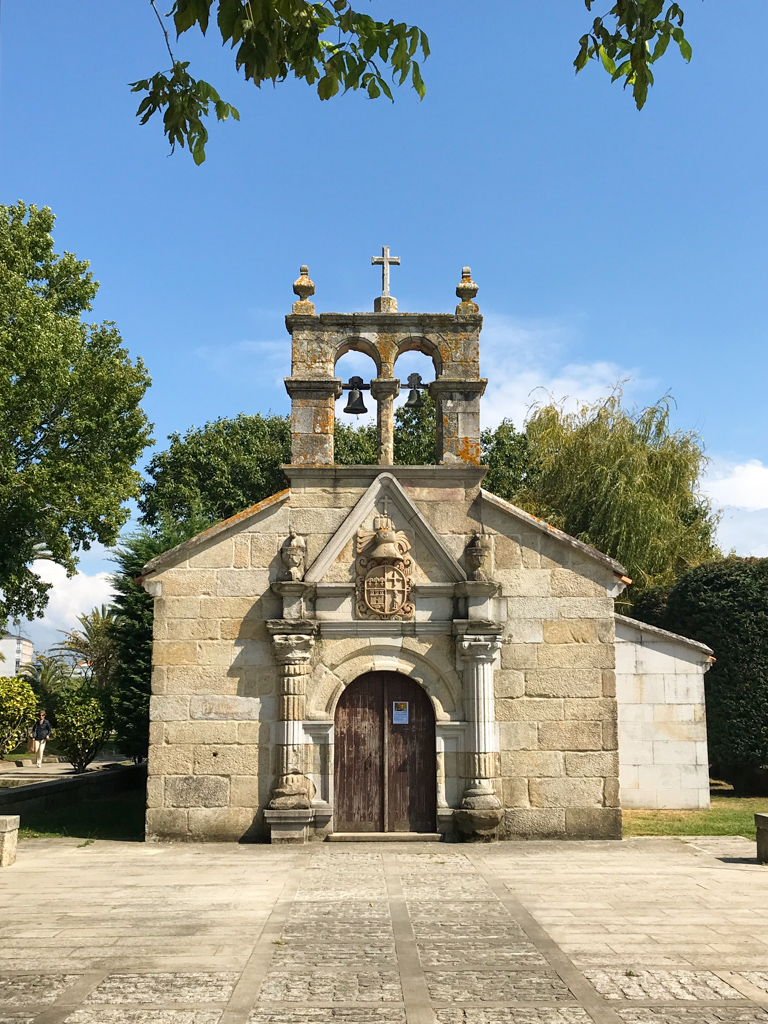 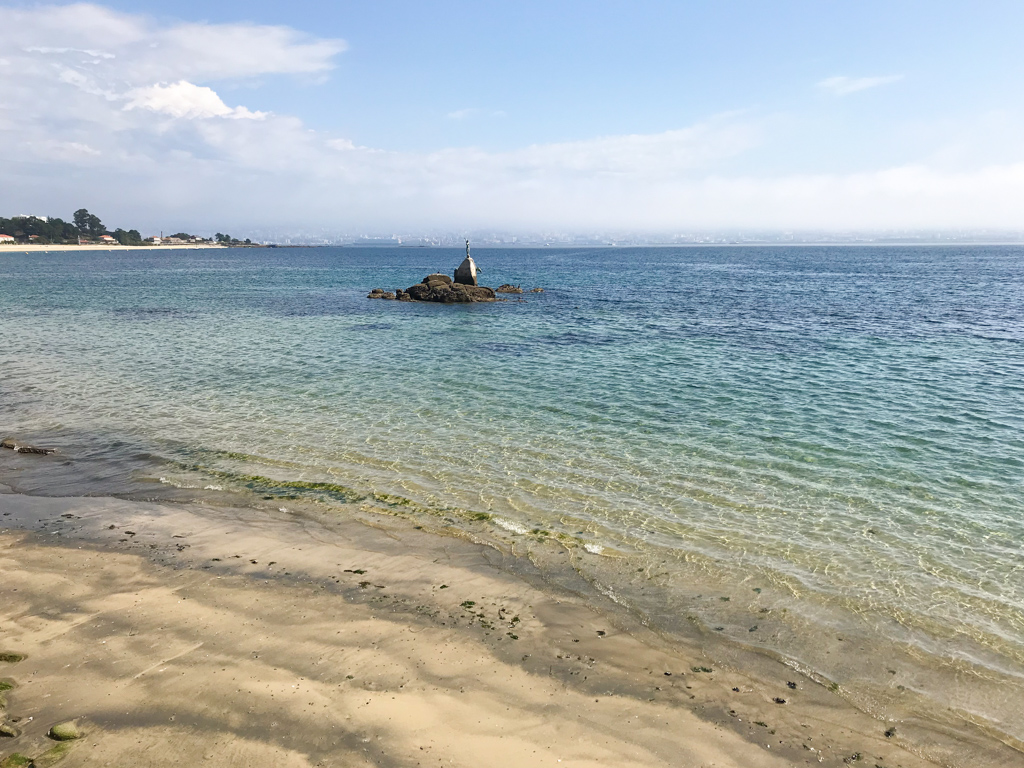 Today was also Victor’s birthday! We celebrated by going to lunch at Taberna do Jefe in the old part of Cangas. This taberna is a very traditional tavern sourcing local produce throughout the year. You never know what options are available in these traditional places because they serve whatever they’re able to source. We considered ourselves particularly lucky though because they had velvet crabs (nécora). They’re delicious and very meaty — what a treat! 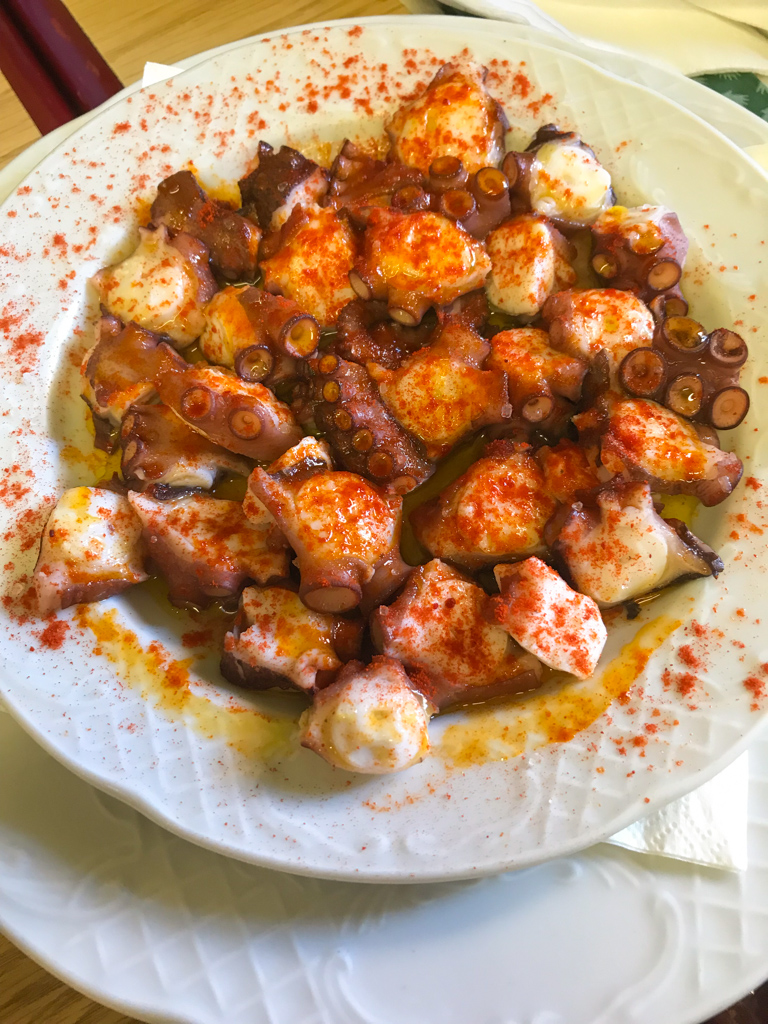 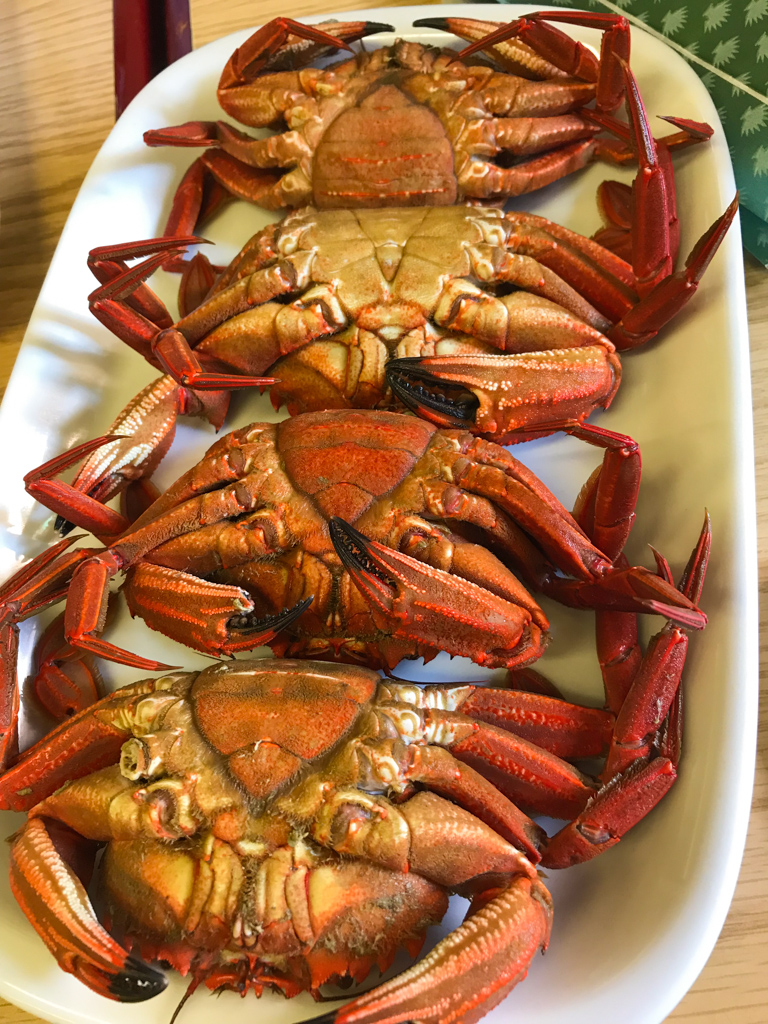 From the town of Cangas, we drove westward to the edge of the peninsula where there are several lighthouses dotted along the coast. We walked around and ran into Faro de Punta Subrido and we also went to a viewpoint to see Faro de Punta Robaleira (it’s that red dot in the photos below). The weather was pretty eerie on this side of the peninsula, so unfortunately the views were not as spectacular as we would’ve liked. Nonetheless, it was a lot of fun to roam around the pine tree forests. We also visited a beach, Praia de Melide. 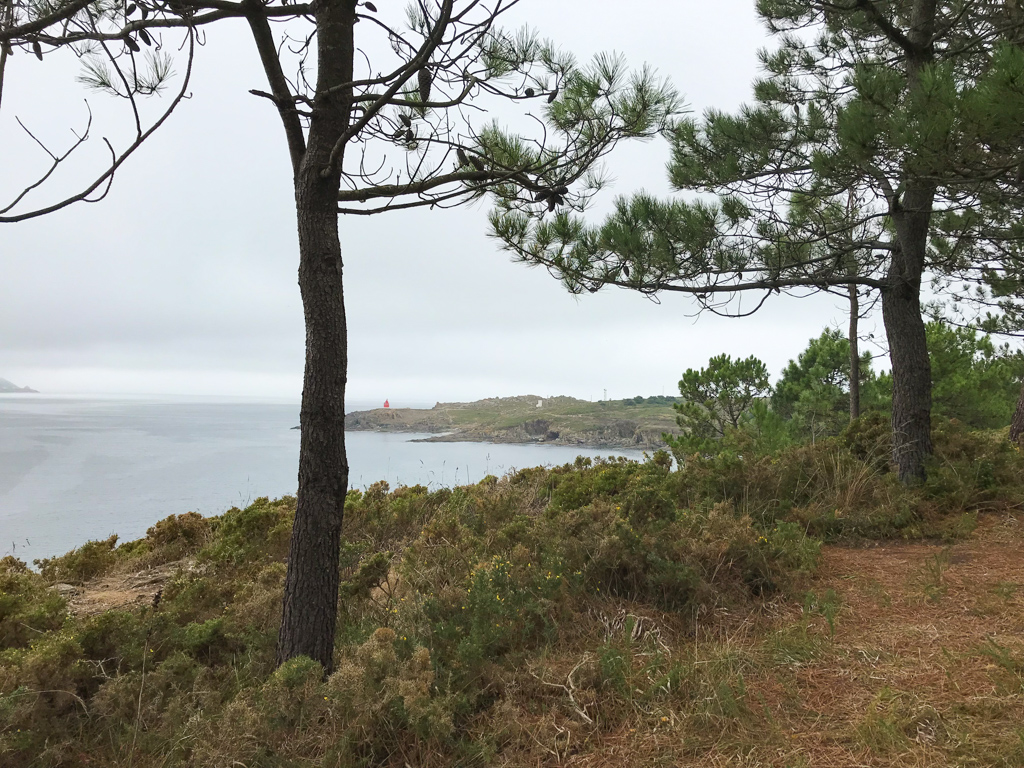 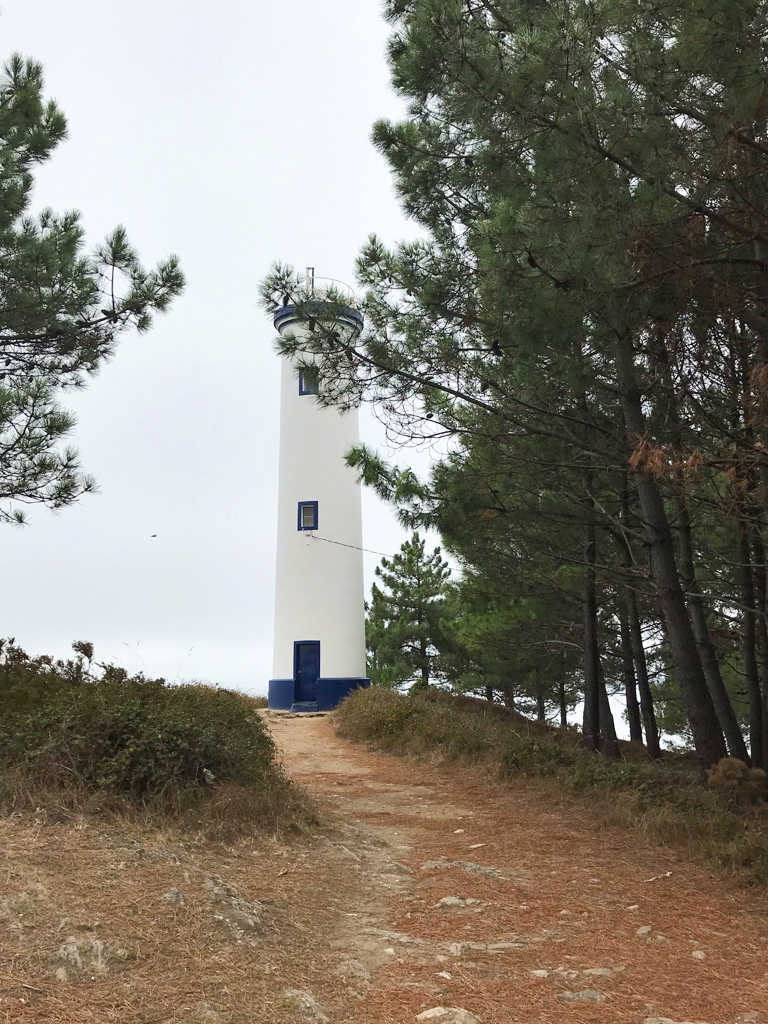 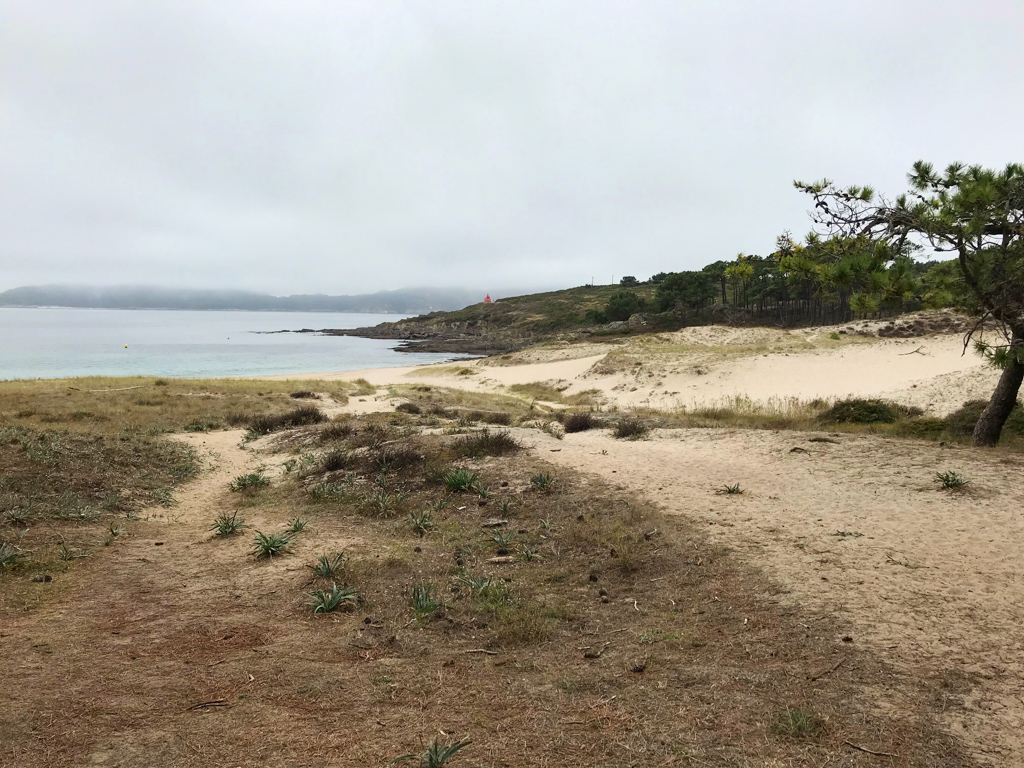 As I detailed in Part I, one of the most characteristic features of Galicia is the cruceiro. There is one in every town and at pretty much every crossroad. The most famous cruceiro in Galicia is in the town of O Hio. 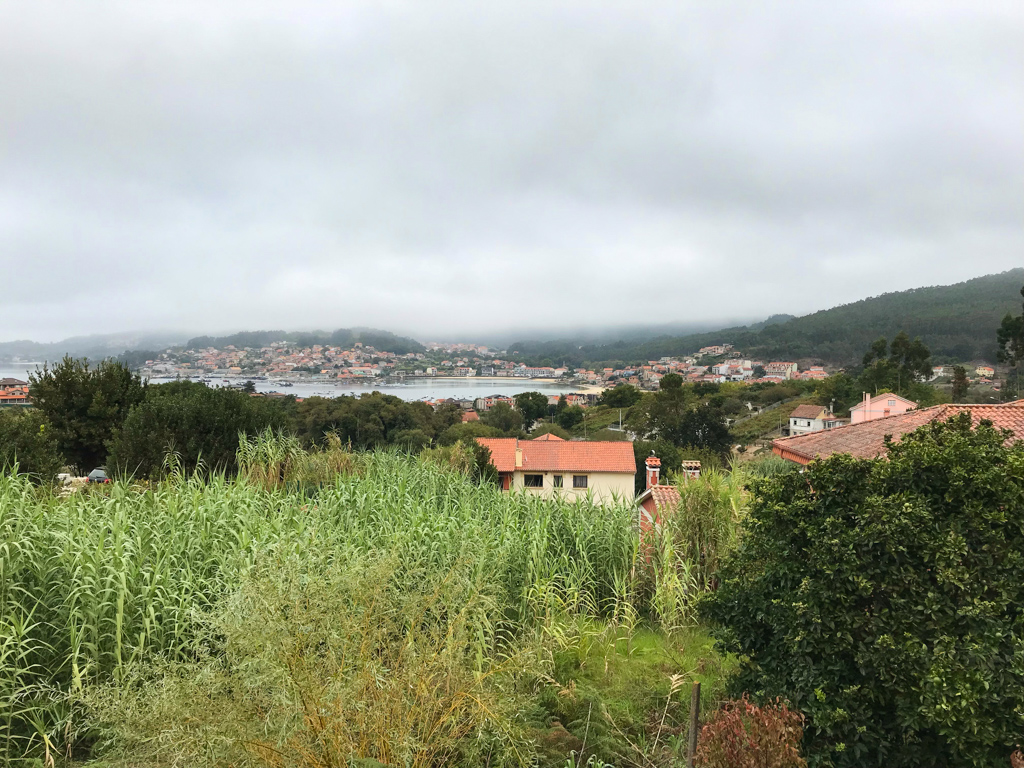 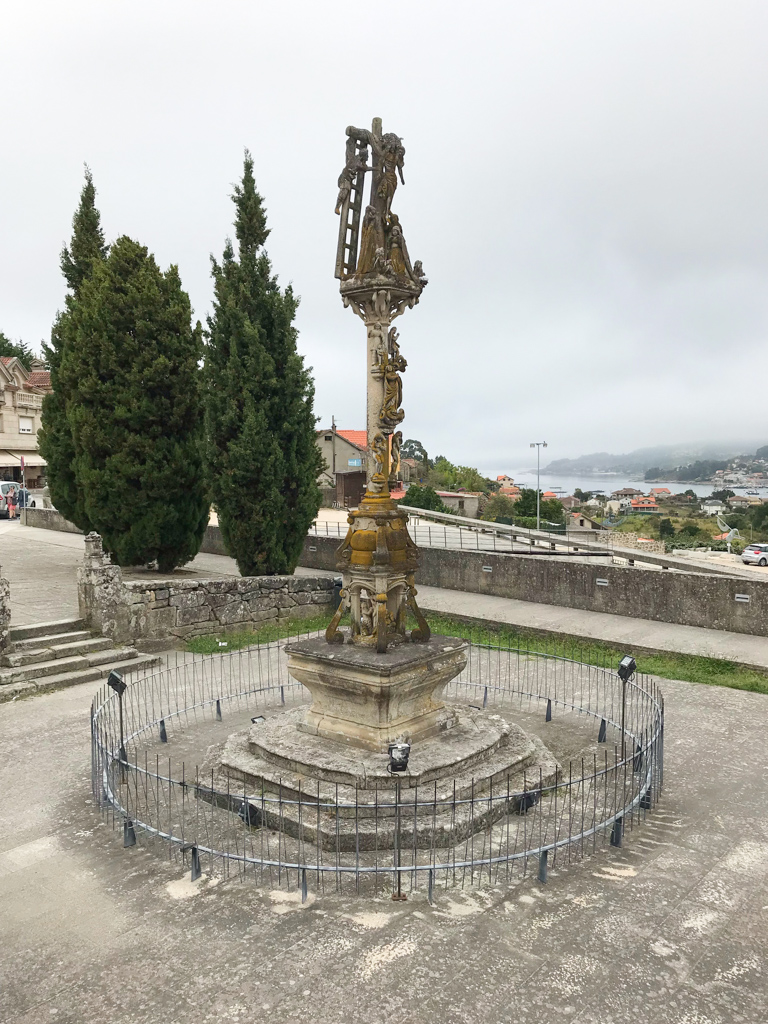 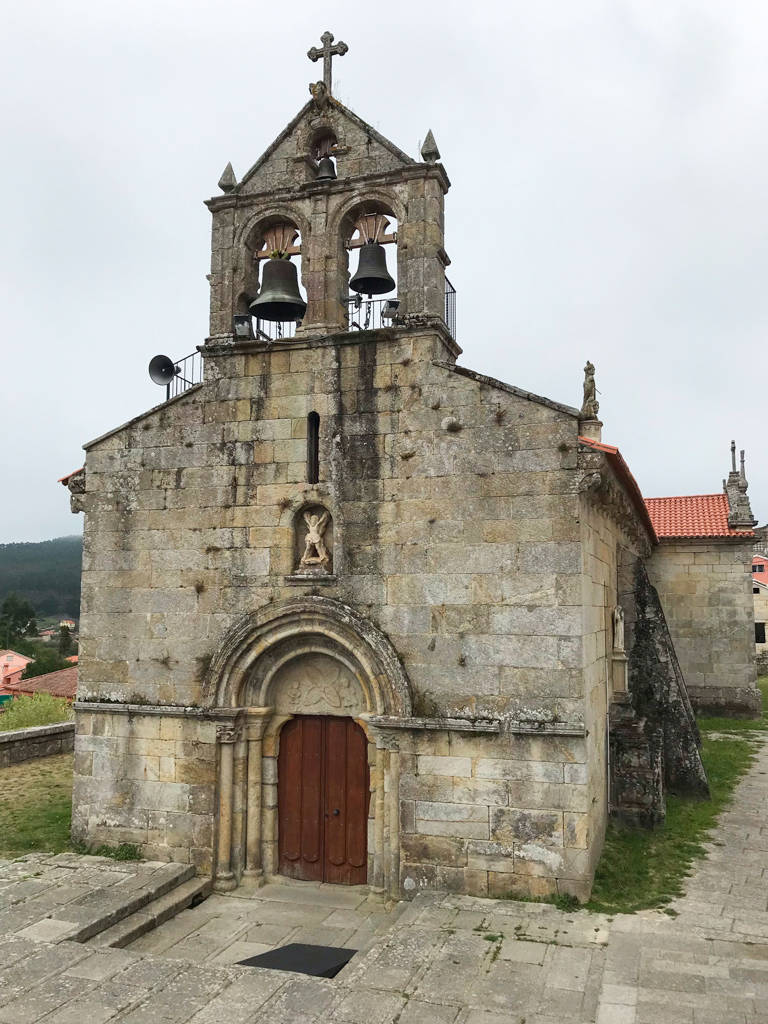 In the same square as the Hio cruceiro is a modern sculpture of a gaita or bagpipe. Yes, the national instrument of Galicia is a bagpipe. This is just one of the many interesting, Celtic connections that Galicia has. It’s up for debate as to how connected Galicia is to the rest of the Celtic world (currently considered to include just Scotland, Ireland, the Isle of Man, Wales, Cornwall, and Brittany), but you’ll find many Galicians claim that their heritage is Celtic. Who am I to judge another person’s heritage? Nonetheless, many Galicians participate in Celtic music festivals. Next time I’m in Galicia I’d love to attend a concert so I can see these bagpipes in action! 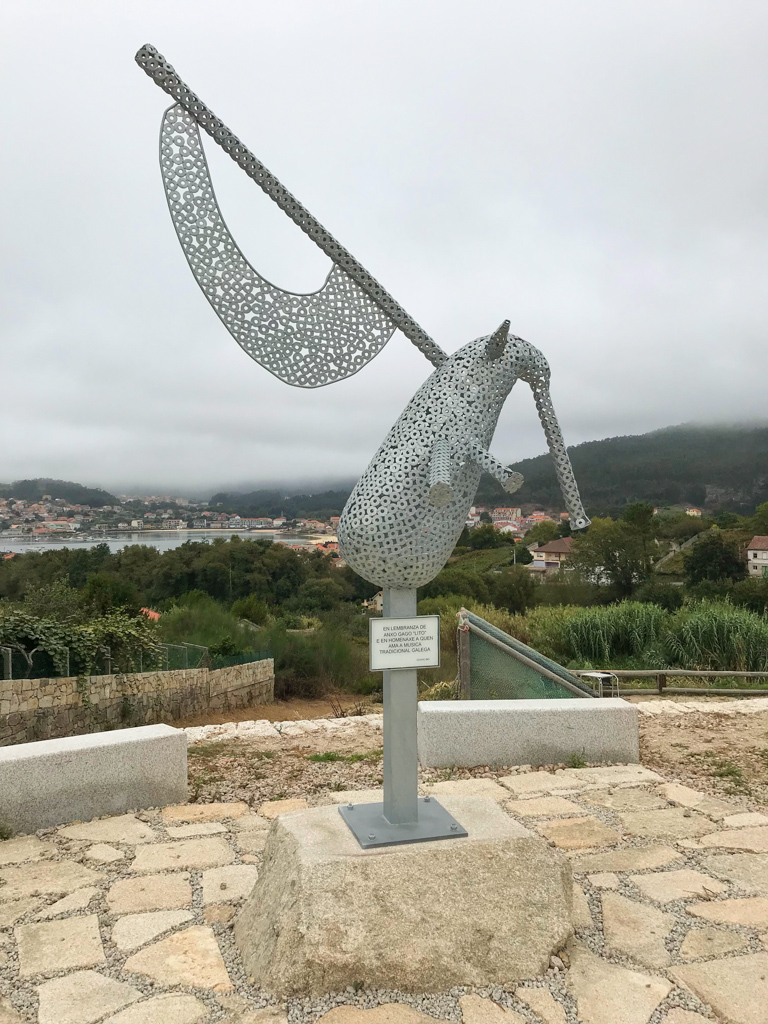 The actual city of Vigo is located on the southern coast of the ria. As I mentioned above, it’s a major economic hub not just for the ria, but for Galicia and Europe too. Vigo’s municipality is also the most populous in Galicia. 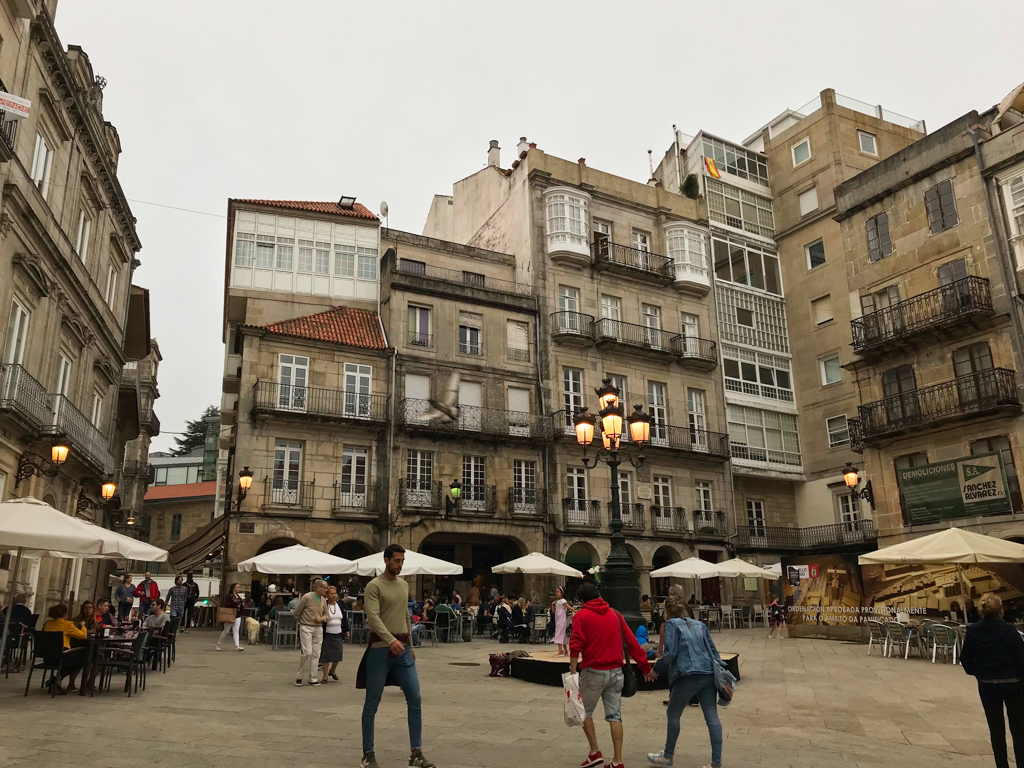 Vigo is famous for its oysters, so we had to of course try some here! Each morning oysters are picked from the beds in the ria and brought up to Pescadería Street in the center of the city. This street is also known as Calle de las Ostras (Oyster Street) for this reason. Along the street, there are four oyster sellers where you can try the fresh catches of the day. We tried two types of oysters, and of course, had some Albariño with our delightful snack. 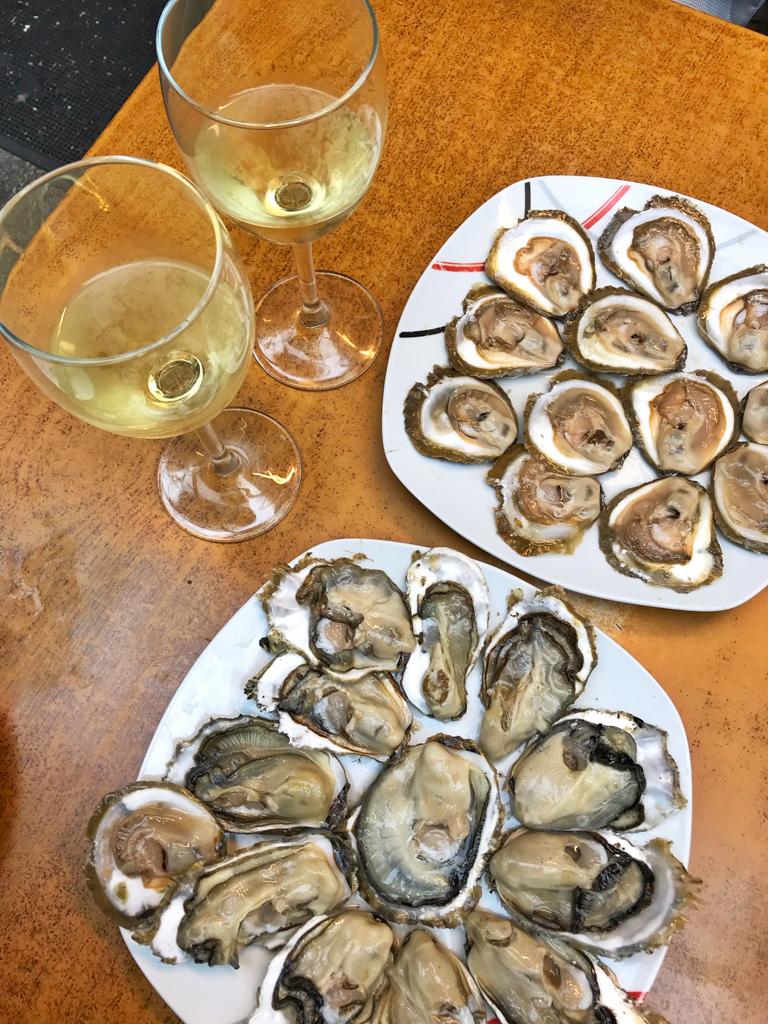 Before heading to Galicia, we had asked our friends and family whether they had any recommendations for the area. Victor’s cousin highly recommended eating out at a furancho. A furancho traditionally was a private home where the residents sold that year’s surplus wine. Once people started to buy their wine, the residents decided to start offering their own home-cooked meals. This has now evolved and is a proper place to eat! Furanchos are usually in small towns up in the mountains and they’re as local as it gets. They’re also extremely affordable and the food is incredible, plus everyone is so friendly!

And so, after exploring Vigo, we headed to dinner at a furancho called Baxiña (about 20 minutes away from Vigo). It was really great and we enjoyed all the various plates. We also had Albariño wine, of course. 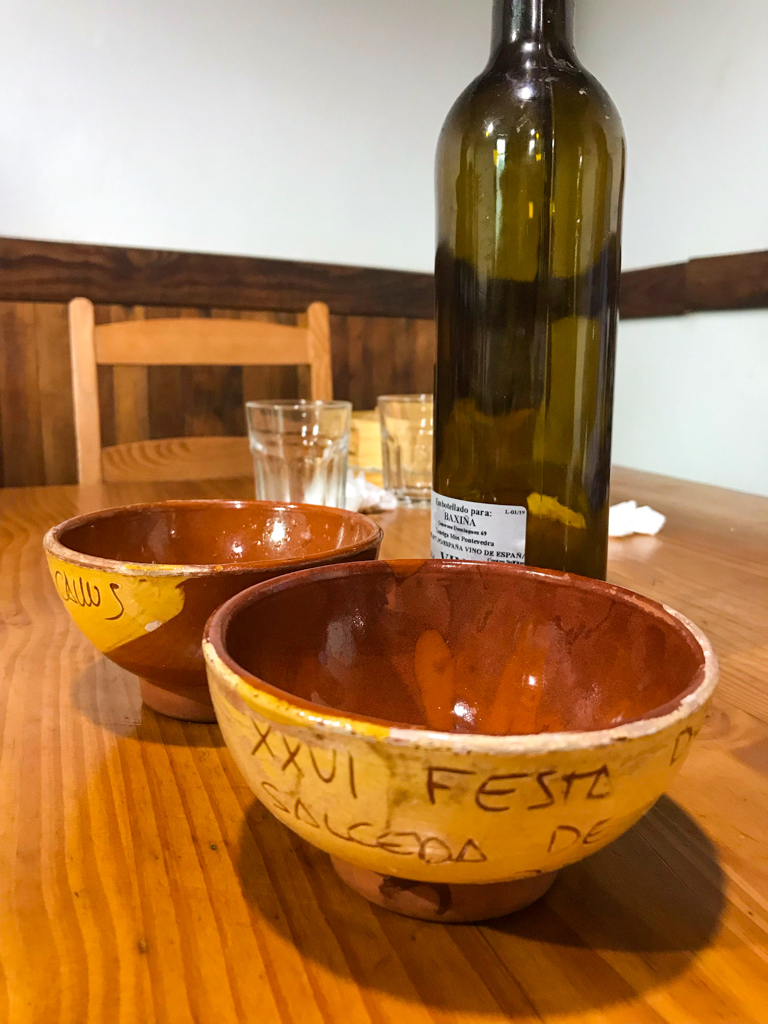 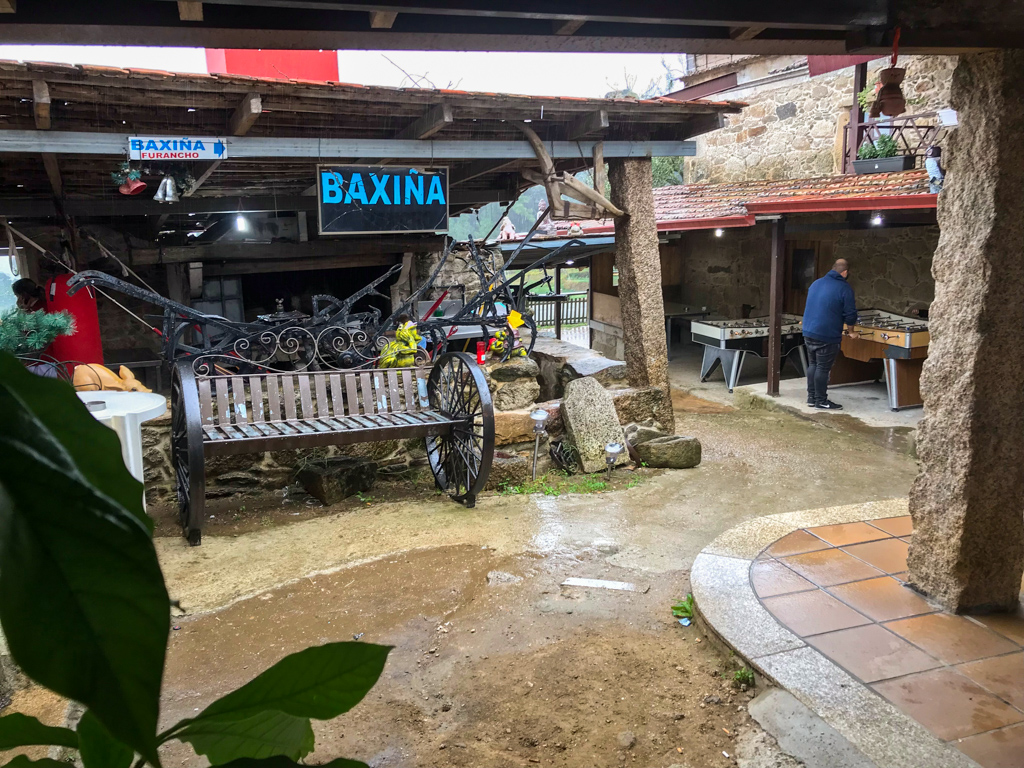 On another day we headed to the furthest southern, western point of the ria. We visited Baiona, a relatively touristy town but it does have a lovely historic center worth visiting. The tourist element comes mostly from the fact that the town is along the Portuguese Way, the second most popular route for the Camino de Santiago. Just outside Baiona is a very large statute, the Virxe da Rocha. It’s a giant marble and granite statue of the Virgin Mary. While it is a remarkable work of art, what’s even more remarkable is that you can climb up a staircase inside to access the little boat she is holding in her right arm. It was really fun to wander up there, but also there are fantastic views of the bay. 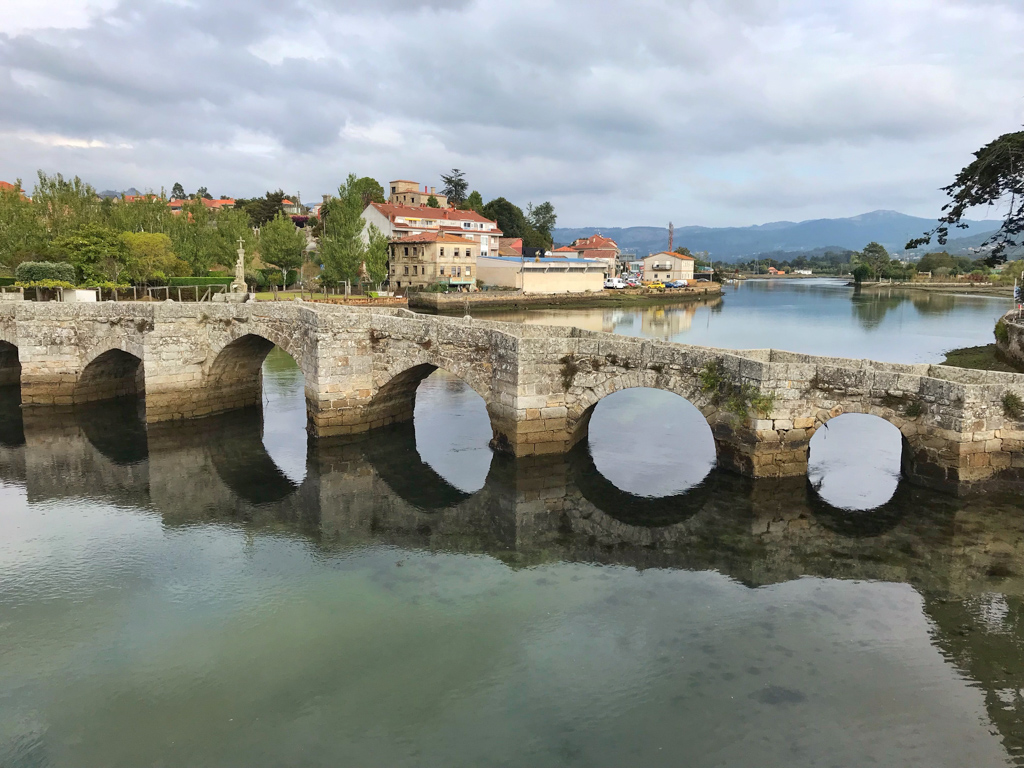 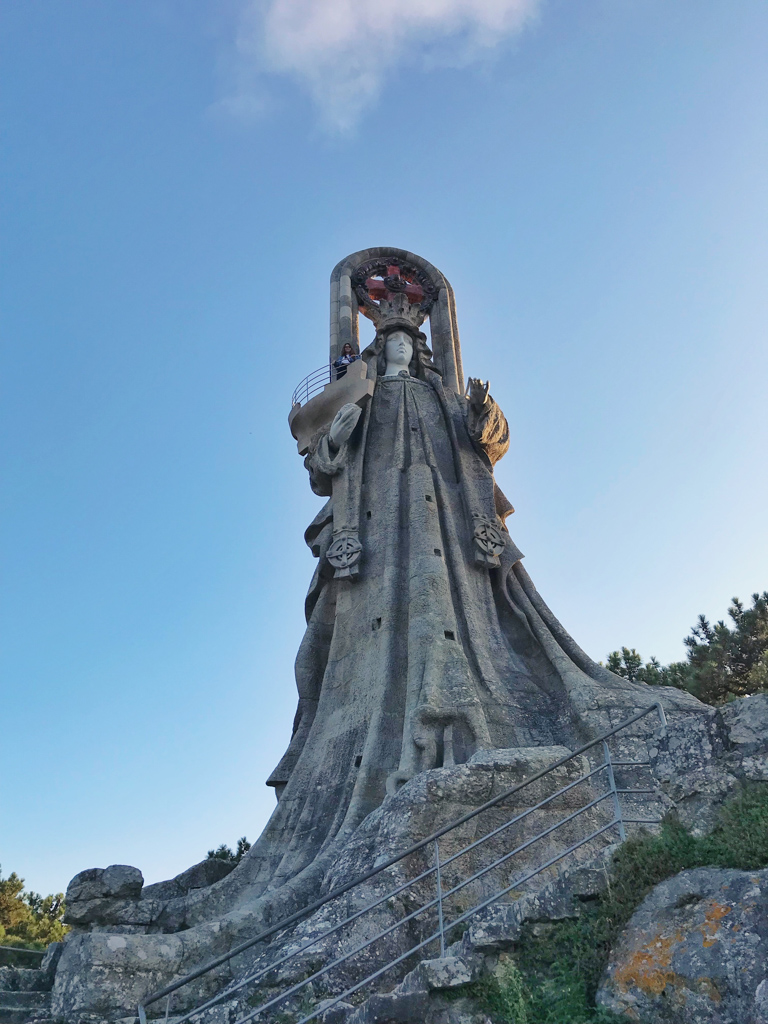 Not a bad way to end another day of exploring the Rías Baixas. Before long it was time to head back to the apartment to rest to prepare for another excellent day in Galicia.

And so ends my blog post series on the Rías Baixas. What do you think of this unique area of Spain? 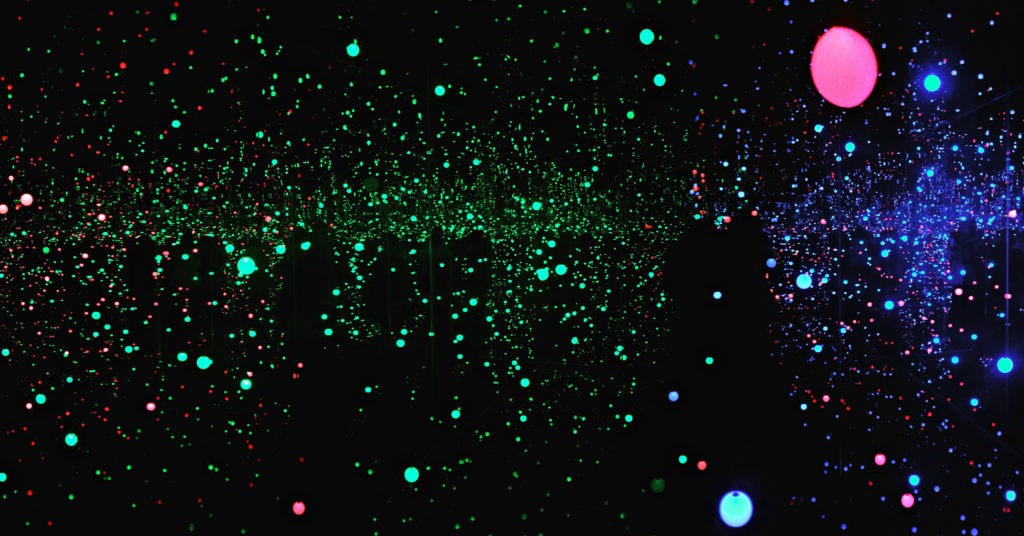 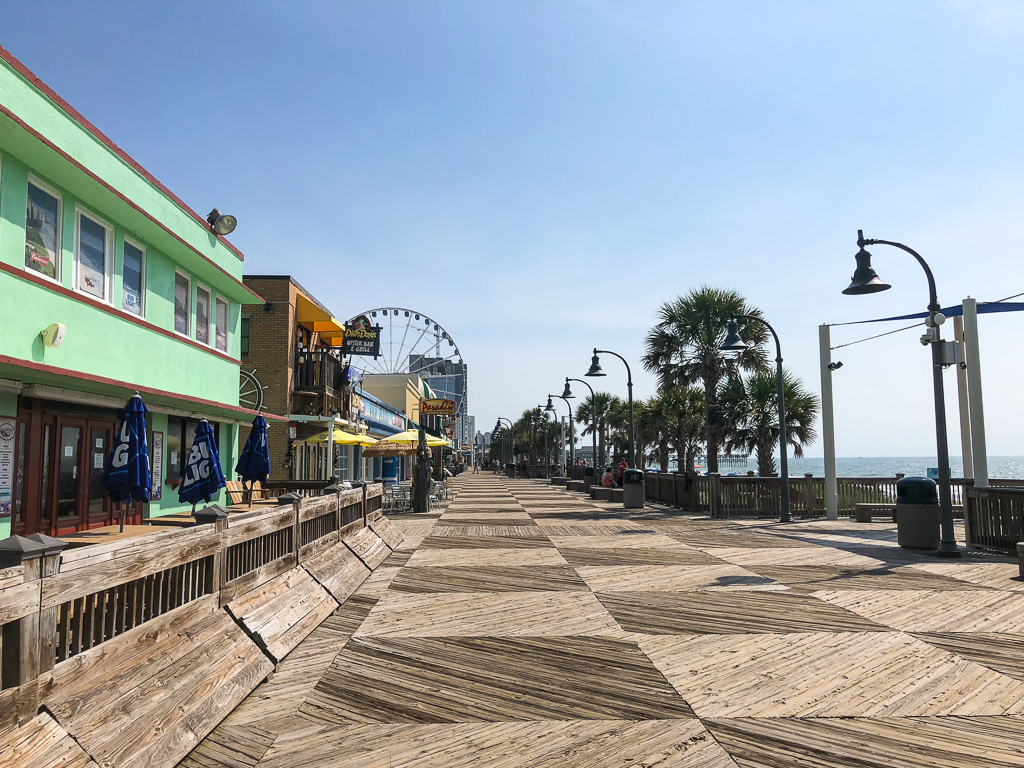 A Family Vacation in Myrtle Beach 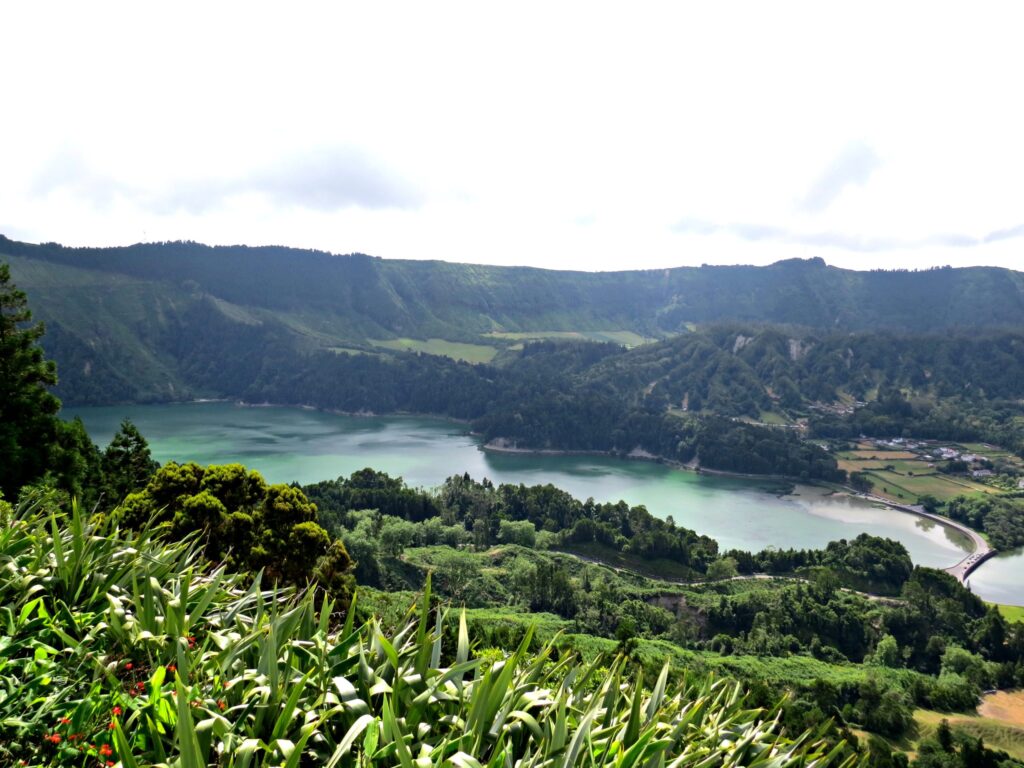