Sunday Roast at the Pig & Butcher 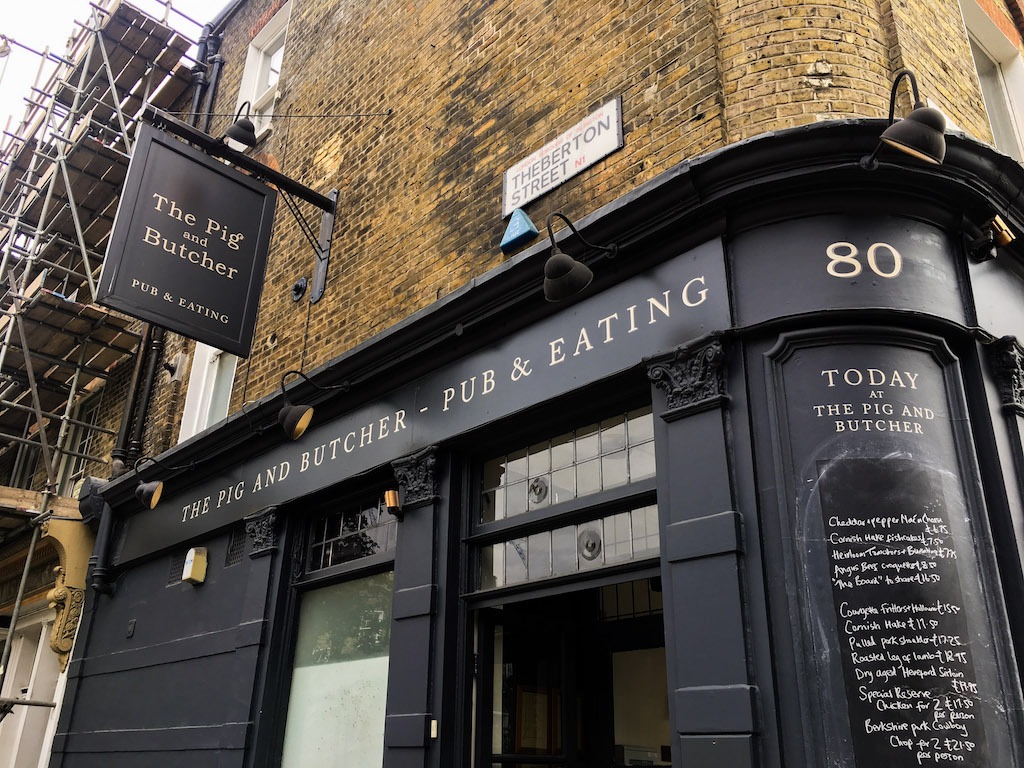 My thing these days is to find restaurants and cafes that source their produce from local farms. I am inspired by Chef’s Table piece on Dan Barber, a chef who spearheads the local cuisine movement which is based on seasonal produce. On the one hand, this is not a difficult task because it seems to be trending these days. However, on the other hand, it is not as easy as you might think because not everyone is true to their motto. Modern British cuisine is an up and coming cuisine. I feel as though it is a lot like American cuisine — not many people know what it is except for the handful of stereotypical dishes (hamburgers and hotdogs for the US and fish and chips and shepherd’s pie for the UK).

The Pig & Butcher is all about transparency and honesty. Originally just a butcher, all meat is still slaughtered on site. In addition, this gastropub lets you know where all its meat and fish is sourced from (all within the United Kingdom). My visit included a vegetarian spread. Even though I do eat fish and seafood, I really wanted to sample the produce. I think this is where these kinds of places really shine. As a starter we ordered the heirloom tomatoes, burratina, roasted red onion and herb dressing. You might ask, how good can a tomato be? Very, very good. The combination of the cold, fluffy goats curt with the sweetness of the red onion and the freshness of the tomatoes really makes for a crowd-pleaser. 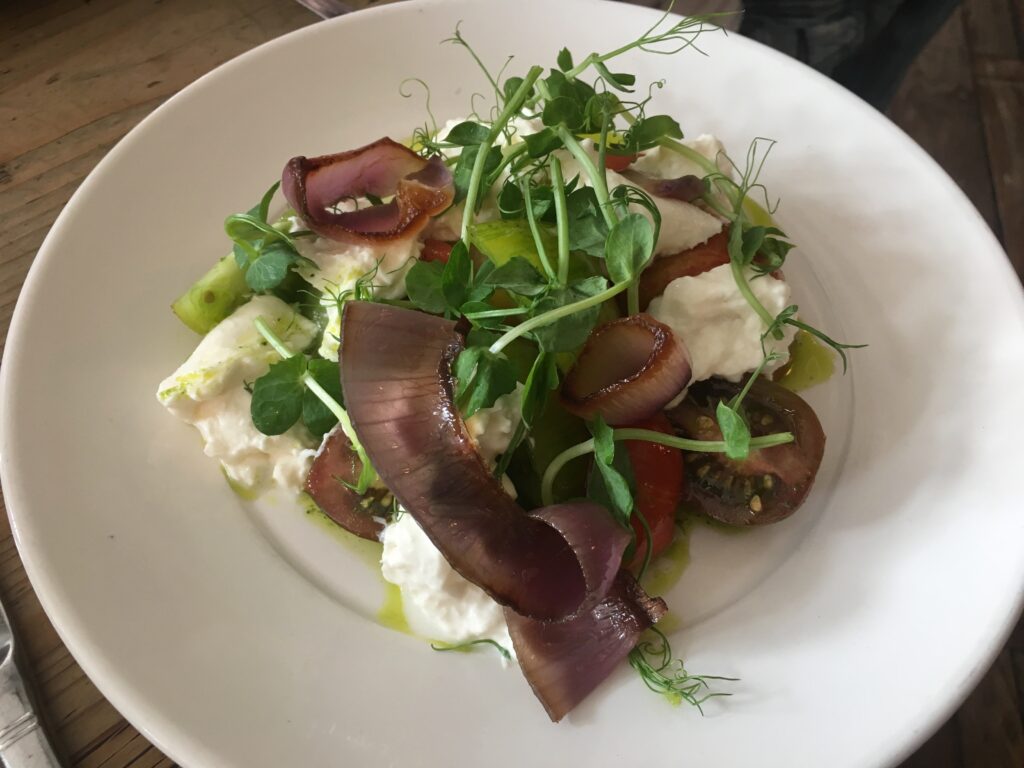 I visited the Pig & Butcher with Victor and his parents who all got the Sunday Roast. Their feedback was that the meat was extremely tender, but also that all the components of the Sunday Roast were spectacular. Even Victor’s mom ate all the cabbage because it was delicious. For drinks they had Redchurch Paradise Pale Ale. Our waiter told us a great tidbit about this beer. The Pig & Butcher staff meet with local farmers and producers to figure out what is great this season. At the meeting, the farmers served Redchurch in which the wheat they use for the beer is fed to the cows raised for the Pig & Butcher. It is just another great example of keeping things local and connecting all parts of the food chain. 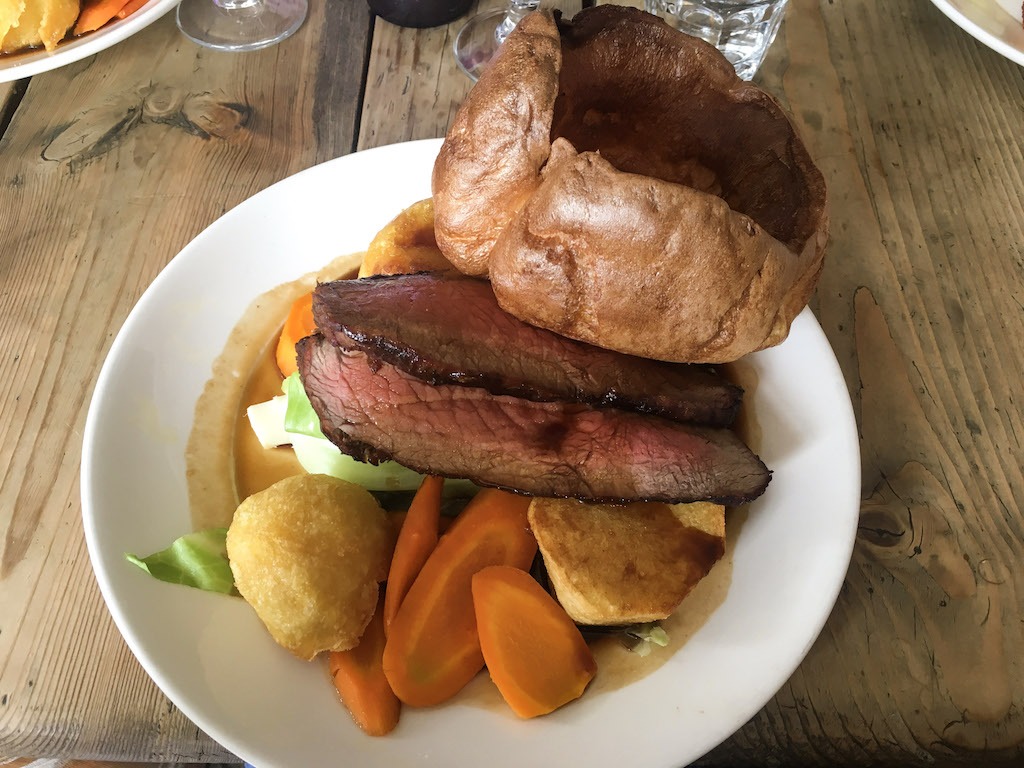 As for me, the vegetarian dish was courgette fritters, crispy halloumi, spiced cauliflower and goats curd. As I’m starting realise combination of flavours might be their things, this combination too was divine. I even added a little bit of mustard to deepen the flavours. 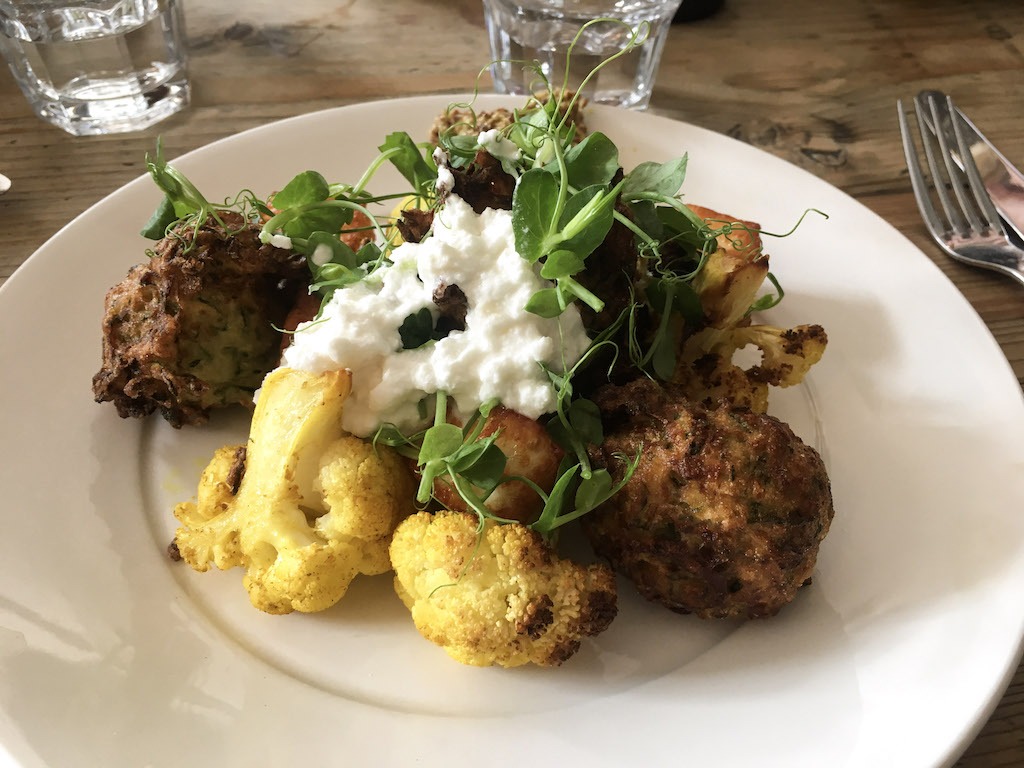 Though I was so incredibly full I could not miss out on dessert from this place. I knew it was going to be good, no matter what I picked. I chose the rice pudding brûlée and strawberry sorbet. At first Victor and I were not sure whether it was going to be a rice budding or a creme brûlée, but all our questions were answered soon enough. Think of the most creamy, delicious rice pudding you’ve ever had and then top that off with flame-torched sugar. A scoop of strawberry of sorbet melts on top to mix with the sugar below. This adds some refreshing, fruity flavours to the mix. 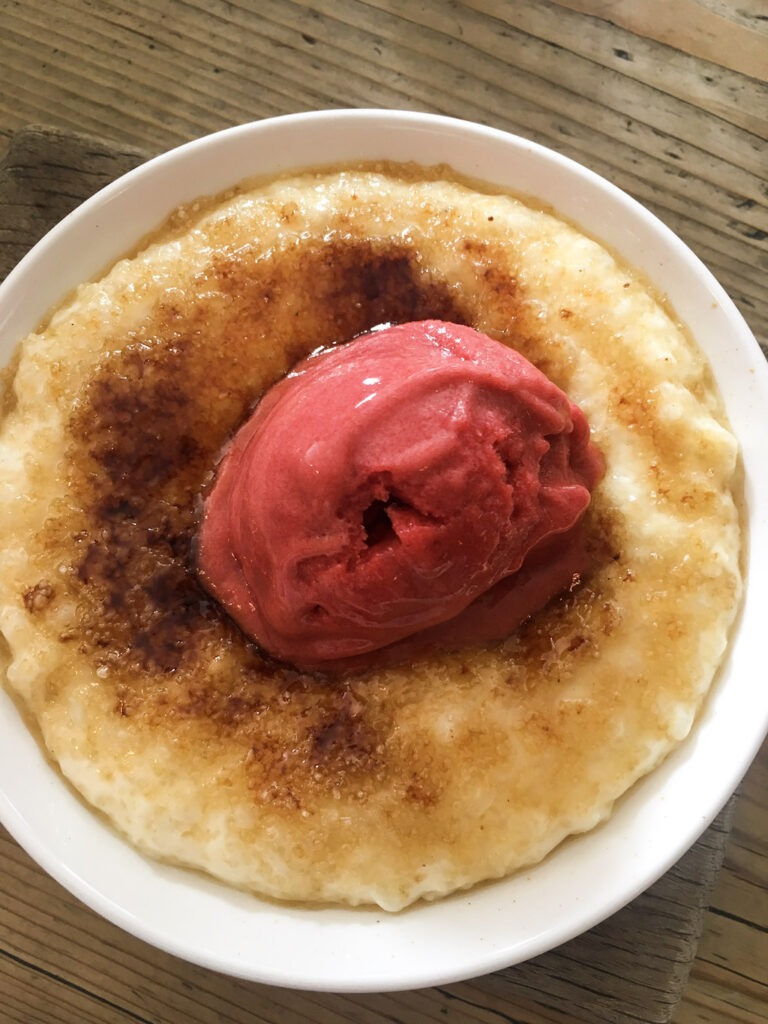 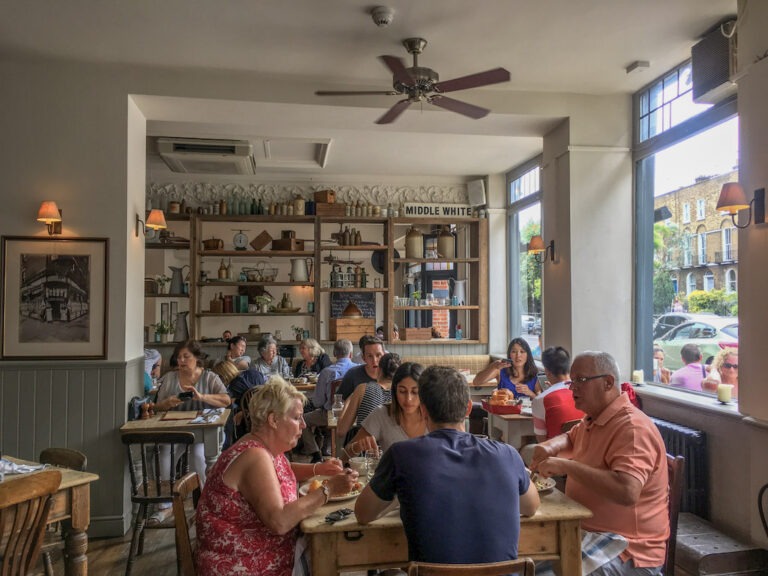 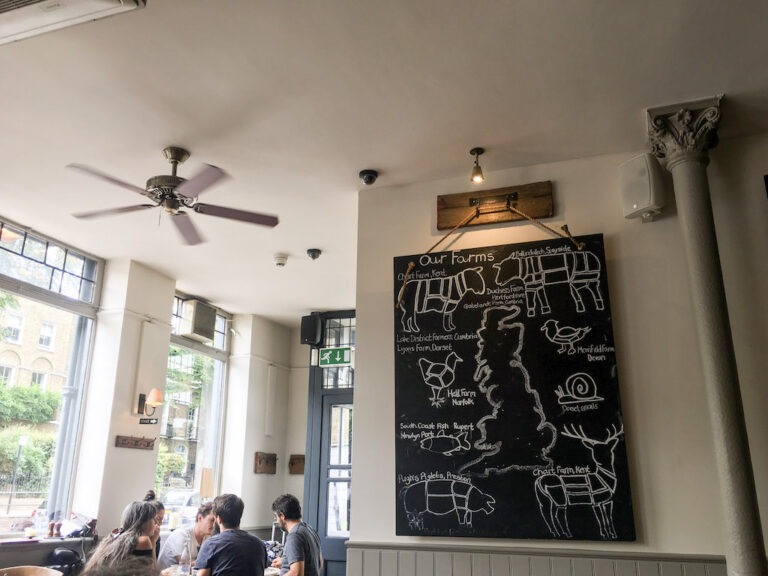 Our experience at the Pig & Butcher was, to me, an example of what British cuisine really is. It’s about sourcing locally, using seasonal produce, and combining these things to create simple but delicious dishes.

Don’t miss out on a traditional Sunday Roast in London! You won’t regret it. 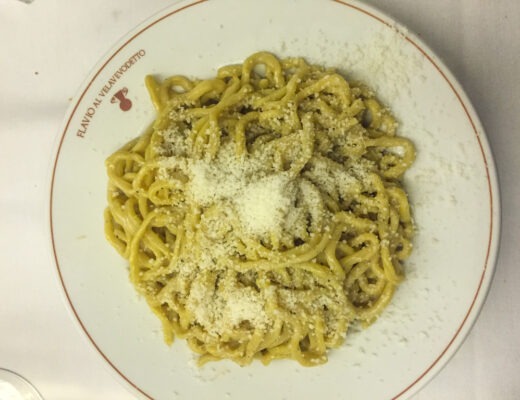 What and Where to Eat in Rome 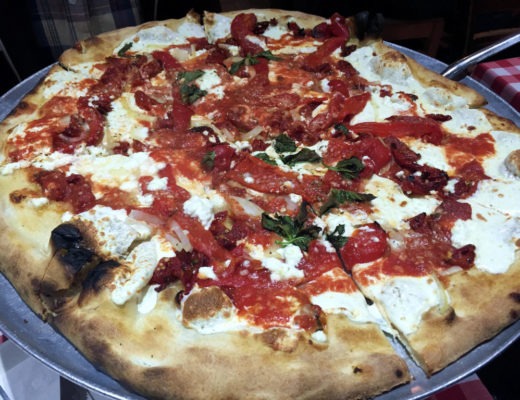 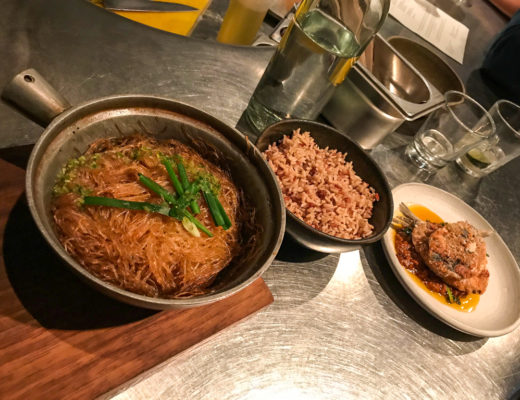 🗻🎎 🇯🇵 At the beginning of the new year

The best croissants in London 🥐 . . And what’

Post-morning run treats and coffee from my beloved